The End Times have arrived. The world is counting down to destruction and the legions of hell and heaven are massing their armies. The demon Crowley and angel Aziraphale are old enemies, so old they're also actually good friends. Faced with the annihilation of humanity and the end of their cushy life of teas at the Ritz and long drives in Crowley's Bentley, they make a pact to help avert the apocalypse and let the human race survive. The problem is that there's been a bit of a mix-up with the Antichrist and now no-one knows where he is. Fortunately, one woman knows exactly what's going on. Less fortunately, she died in the 17th Century. 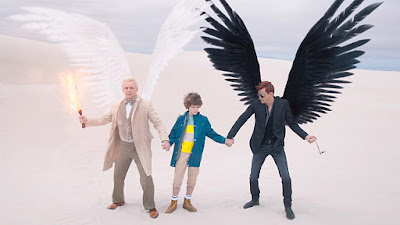 Good Omens is a six-part television adaptation of Terry Pratchett and Neil Gaiman's 1990 novel of the same name. The history of getting the novel to the screen is itself epic, with Terry Gilliam trying for years to develop it for both film and TV before giving up. Unfortunately, it took the untimely and far-too-early death of Sir Terry in 2015 to spur the project forwards and finally get it made. Neil Gaiman himself wrote the script, updating it for the modern day, removing elements from the book that didn't work (or were too expensive) and introducing new scenes to make the story work better on screen.

At the heart of Good Omens is the relationship between Aziraphale and Crowley, played to note perfection by Michael Sheen (Masters of Sex, Twilight) and David Tennant (Doctor Who). This relationship is the fulcrum around which the show revolves and it is excellently handled throughout, with the two characters engaging in both humorous banter, mutual support and affectionate sniping at one another like an old married couple. The series highlight is the opening of the third episode, which dedicates a full half of its runtime to exploring the characters' backstory and relationship across six thousand years of human history. Sheen and Tennant's chemistry is palpable and a constant delight.

This relationship is central to the show's success, but it can also feel like a crutch. The other performances are also mostly excellent, but the characterisation feels flatter. Some of this is inherited from the book, such as the feeling that Anathema Device (Adria Arjona) and Newton Pulsifer (Jack Whitehall) should really be the protagonists but the writers realised the demon/angel conflict was far more interesting and pivoted to focus on them. Anathema and Newton remain somewhat underdeveloped on TV as well, despite the best efforts of the actors to make them work, which is an issue when they play a vital role in the resolution of the story. Similarly, the young gang of children feel undercooked as well. Ideally we'd get a Stranger Things vibe going on with them but instead their storyline comes across as bland.

Another slight misstep is the presence of God as the narrator, voiced by Frances McDormand. In some scenes this is effective, but in too many others it's incongruous, over-explaining jokes that don't need explaining or dragging scenes out far too long. Having God explain how the babies get mixed up is an odd choice when we can visually see what's going on and it doesn't need expansion. Good Omens has occasionally been criticised for being a bit too Douglas Adams-like in tone and voice, and the narrator doing the same job as the Hitch-Hiker's Guide to the Galaxy (but with far less in-universe justification) certainly contributes to that feeling. The pacing feels like it could be either a little tighter or a little looser. At four or five hours the end-of-the-world countdown tension would have been stronger, but the story would have needed to have been cut a lot more; at nine or ten we've have had more time to develop the secondary characters. But at six hours, enough to polish off in a couple of evenings, it's hard to complain.

Fortunately, everything else is pretty much on fire. Nick Offerman and Jon Hamm do a huge amount with small roles, and the production design, visual effects and location filming are all superb. There's a joy in the attention to detail as the centuries roll by and the protagonists' fashions change only moderately. Most of the jokes land on screen as well as they did in print, and there is a sense of enjoyment from seeing something so quintessentially British (occasionally veering towards tweeness, but being intercepted before it gets there) being rolled out for the entire world on a massive budget and being handled so well.

Good Omens (****) certainly isn't a flawless adaptation, but it is fun, doesn't outstay its welcome and its lead performances are for the ages, even if the rest of the characters sometimes struggle to keep up. It is available to watch now on Amazon Prime.
Posted by Adam Whitehead at 11:51

I loved the book decades ago and I loved how the new series hit almost all of the beats that I remembered so fondly.

I was glad that the focus was so clearly on Aziraphale and Crowley... they were my favorite parts of the story. Tennant was as awesome as I thought he would be, and Sheen, who I had never seen before, was great too. I was also okay with them having different colored wings at the end, which is straight out of Sandman and other pop culture. I would agree that the rest of the characters were underdeveloped, which showed the most in the cringey scene when Newt and Anathema got together.

The tone was changed a bit at the end, which is probably okay, but I missed the feeling of Adam being trapped in Tadfield rather than going off on more adventures. It did make for a happier ending though.

I liked the epilogue too... it was fun. It didn't feel tacked on, and it didn't fall afoul of Gaiman's occasional inability to end a story.

I was mostly okay with the narrator being the voice of God, except for the end of the baby swap scene, which changes it from 'Look how awful those Satanists are,' to 'Wait, God just ineffably killed that baby!'.

I do think that they seem to have flubbed a lot of the special effects in the last episode though:

Death was seriously lackluster, with a weird face, not the best voice (maybe it's a well known voice in Britain?), but mainly the reveal of his wings were uninspired, like a stop motion crow followed by a night sky screensaver. This is an effect that was nailed decades ago in shows like Gargoyles (when Goliath gained the powers of Odin) and Inuyasha.

Satan was better left off screen entirely... I guess they wanted to go for spectacle, but the CGI just wasn't that great.

The flaming sword was 'magnesium bright' in the book, and only activated when it was back in Aziraphale's hands, and I was a bit bummed that it was flamey beforehand and was more of a 'Krod Mandoon' level of flame.

I'd still have to say that the first 5 episodes were phenomenal and the sixth was only a bit behind!

Sadly, I have to disagree. Beginning with the deeply embarrassing animated opening, this was a dog's dinner which I abandoned halfway through episode three; alternatively twee and flaccid, the series never managed to take off. I had been looking forward to it, as I enjoy the humour in many of Pratchett's books, but it seems as though it simply doesn't translate to the screen. Too bad.