The Warmaster by Dan Abnett

The Tanith First have completed a near-impossible strike mission to the remote enemy outpost of Salvation's Reach. As well as stealing a vast amount of intelligence material from the enemy, their attack has triggered an internal conflict within the Chaos armies between Sek and Gaur, allowing the Crusade to reach new levels of success. But a warp mistranslation on the way home throws the First into a dire new battle, as Gaunt and his team have to face a desperate Sek in battle on the forge world of Urdesh, and face a renewed threat from within the Crusade's own leadership. 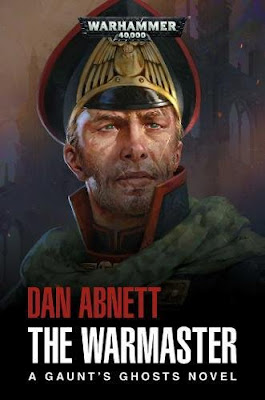 The Warmaster is the fourteenth novel in the Gaunt's Ghosts series and the penultimate volume in the "Victory" arc. It was also released after an unprecedented five-year publishing gap in the series, the result of internal realignments within the Black Library and Games Workshop.

As a result, the book takes a little while to rev up to speed, with a somewhat disjointed narrative that attempts a lot of ideas - the Ghosts being shipwrecked in deep space, visited by Chaos horrors and suddenly in the thick of urban warfare and political intrigue on Urdesh - before the story comes together.

When it does, the results are impressive. We are fourteen books into this series now and we've never even met the guy in charge of the entire operation, and in fact (as Abnett's Sabbat Worlds Crusade companion book makes clear) the Ghosts have been operating on the fringes of the main war effort. Their actions have occasionally been decisive and even affected the main course of the war here and there, but only to a small degree. That revelation gives a real sense of scale to the war - in which tens of thousands of Imperial starships are carrying hundreds of millions of Imperial Guard troops, millions of support vehicles, thousands of Space Marines and hundreds, if not thousands, of skyscraper-sized Titans into battle across dozens of star systems simultaneously - which is remarkable. The Warmaster does a good job of pivoting the action, so suddenly the Ghosts and Gaunt are right in the middle of the key decisions being made for the entire war effort.

Abnett's key gifts are characterisation - finding ways of differentiating the two dozen or so characters of import within the Ghosts, plus various recurring side-characters - and action. He makes you care about the characters and their stakes. Like Bernard Cornwell before him (as tired as the "Sharpe/Uhtred in Space" comparisons are, they remain somewhat apt), he paints these soldiers as individuals with their own strengths, weaknesses and quirks, and makes you care about what happens to them (even the cowards and malcontents). That continues through The Warmaster, with an astonishing array of subplots being furthered in a remarkably constrained page count.

The Warmaster (****) does a good job of bringing together plot threads from the previous books in the series and making it feel like the war has reached a decisive turning point. The temptation to carry on this series forever must be strong, but in this book it does feel like the end of the Crusade is starting to lurch into view. On the minus side, aside from the slightly choppy opening, the ending to the book does feel a bit perfunctory for a Gaunt's Ghosts novel, although the reasons for this become clearer in the following book (Anarch), which is less of a successor and more of a direct continuation of this novel. No five-year wait this time for the next part of the story, fortunately. The book is available now in the UK and USA.
Posted by Adam Whitehead at 21:48