In surprising but welcome news, it has been revealed that Netflix, Warner Brothers and Neil Gaiman are in advanced discussions about developing a Sandman TV series. 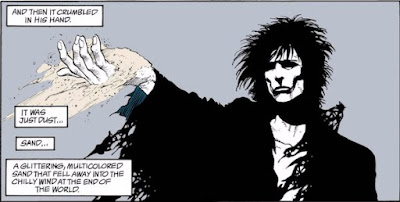 The news comes after the success of Gaiman's American Gods TV series, for Starz and Amazon Prime, and Good Omens on Amazon. Netflix clearly want in on a piece of the Gaiman action as well.

Sandman is Gaiman's magnum opus, a massive story spanning 76 comic issues released by DC between 1988 and 1996, collected in ten graphic novels which have sold well over 30 million copies. The comics tell the story of Morpheus, the Lord of Dreams, after he is imprisoned by an English sorcerer in 1916. He escapes seventy years later, but finds the realm he rules over - the Dreaming - in ruins, and has to set about restoring it. Along the way he reconnects with his family, friends and allies, and realises some mistakes that he made centuries in the past finally have to be made right.

Actor-producer Joseph Gordon-Levitt was previously developing Sandman as a movie project as Warner Brothers, but left after "creative differences" with the studio. It is believed that Gordon-Levitt wanted a straight adaptation of the graphic novels, whilst the studio wanted something more effects-driven to compete the superhero marketplace.

The project has not yet been formally greenlit, but reportedly Netflix and Warner Brothers are close to agreeing terms.

UPDATE: The story has now been confirmed by Entertainment Weekly, with Allan Heinberg set to write, with Neil Gaiman and David Goyer to serve as executive producers. Netflix has apparently stumped up a massive budget and amount of money for the rights to the show. It is also the most expensive television project ever undertaken by DC Comics. Surprisingly, DC and Warner's sister studio HBO turned down the project due to the price tag attached.
Posted by Adam Whitehead at 22:11