The Tanith First and Only, the Ghosts, have been newly-reinforced by fresh troops from Belladon and Verghast and are preparing for their most audacious operation yet. Using intelligence gained at great cost from a Chaos prisoner, the Imperium has located Salvation Reach, a top-secret research facility for the Sons of Sek, their most tenacious foe in the Sabbat Worlds Crusade. The Ghosts and several powerful allies having to mount a spaceborne assault on the facility, a single surgical strike which may decide the fate of the entire Crusade. 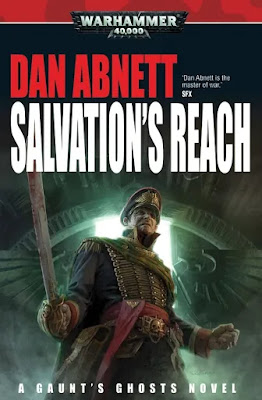 Salvation's Reach is the thirteenth novel in the Gaunt's Ghosts series (and the second in the "Victory" arc) and marks a new phase in the massive conflict known as the Sabbat Worlds Crusade. The Ghosts aren't taking on an enemy head-on, but are instead manufacturing division in the enemy's ranks, trying to turn the Blood Pact and the Sons of Sek against one another so the Crusade can take advantage of the division and secure victory. It's a difficult, ugly mission and one that most Imperium forces wouldn't be able to handle, but for the clandestine Ghosts it's a task more suited to their talents.

The previous book in the series, Blood Pact, was good but atypical for the series, focusing more on a much smaller-scale conflict. Salvation's Reach is a return to mass engagements, but in a different context, with the Ghosts have to take part in hostile boarding action on a space habitat hidden deep inside an asteroid. Along the way they have to take part in an absolutely massive space battle (which will have Battlefleet Gothic fans cheering), deal with a shapeshifting Chaos assassin and negotiate - delicately - with the three Space Marines assigned to help them with the mission.

The action side of things is, as usual, well-handled with the requisite fighting, brave last stands and tactical discussions all being quite good. However, the heart and soul of the series has been Abnett's handling of the characters, from Ibram Gaunt all the way down to the lowliest, greenest new recruit in the Ghosts' ranks. The character arcs are uniformly handled superbly, with several slow-burning story arcs extending across the series coming to startling climaxes in this book (with several callbacks to Necropolis, still arguably the best book in the series and certainly so far the most important). Several beloved characters bite the dust, but more impressive is the way character relationships are developed. The best scene in the book is where a stoic and merciless Space Marine solves one trooper's long-standing medical problem in one swift action and restores his life and military career (previously thought over) to him, without ever breaking character or the tone of the series.

On the negative side of things, there's a few cliches I could have done without (such as hitherto unknown family members showing up unexpectedly), but otherwise Salvation's Reach (****½) is a gripping, excellently-executed science fantasy war novel with a brilliant line in characterisation. It is available now (alongside Blood Pact) in The Victory: Part 1 omnibus (UK, USA).
Posted by Adam Whitehead at 14:35