AVENGERS: ENDGAME directors working on a MAGIC: THE GATHERING TV series for Netflix

The Russo Brothers, directors of multiple Marvel movies including Captain America: The Winter Soldier, Civil War, Infinity War and Avengers: Endgame (which should imminently become the highest-grossing movie of all time), have pivoted to Netflix and animation, where they are developing a Magic: The Gathering TV series. 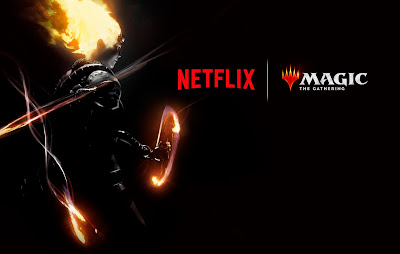 Magic: The Gathering is a card game where players engage in battle using cards to represent spells and summoned creatures. Designed by Richard Garfield and originally released in 1993 by Wizards of the Coast, the game was an immediate smash hit, selling millions of cards in a short space of time. The game made Wizards of the Coast hugely successful, leading to them buying TSR (the creators of Dungeons and Dragons) in 1997. Wizards in turn were bought out by Hasbro in 1999. In 2015 it was believed that more than 20 million people worldwide had played the game.

The game has expanded far beyond its original incarnation to incorporate video games and novels. Some of the settings from the card game have also been developed as campaign settings for the current Dungeons and Dragons rules set.

Hasbro were keen to develop the property as a movie, point tapping Game of Thrones writer Bryan Cogman to write a script in 2014. However, the project stalled and appears to have now pivoted to television, with Hasbro's Allspark Studios working on the project. Joe and Anthony Russo are working on the project alongside Henry Gilroy (Star Wars: Rebels) and Jose Molina (The Tick), who will serve as the head writers. The series will apparently follow the adventures of a band of planeswalkers, including Chandra Nalaar (pictured in the concept art above), a popular character from the fiction.

No production timeline has been released, but I imagine we'll see this project in 2020 at the earliest.

Netflix are also collaborating with Hasbro on War for Cybertron, a Transformers prequel TV series aimed at older viewers.
Posted by Adam Whitehead at 13:38

Email ThisBlogThis!Share to TwitterShare to FacebookShare to Pinterest
Labels: hasbro, magic: the gathering, netflix, news, the avengers: endgame, the russo brothers, wizards of the coast