FINAL FANTASY TV series in development, based on FF14 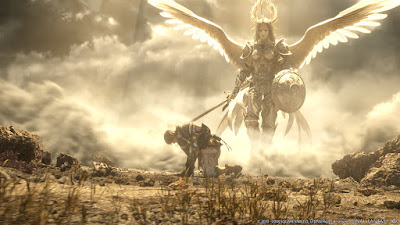 The series will be loosely based on Final Fantasy XIV, a multiplayer online game with a strong narrative component. The story will focus on the realm of Eorzea, which is being invaded by the Garlean Empire. The heroes are Warriors of Light, great warriors and mages called to stand against the Empire.

Final Fantasy XIV was originally released in 2010 to a middling reception; it was later rebooted as Final Fantasy XIV: A Realm Reborn in 2013 and became a huge success, with over 16 million subscriptions sold. By some counts, it is currently the second-most-popular fantasy MMORPG in existence, behind only the veteran World of WarCraft.

The decision to focus on Final Fantasy XIV (with its fluid and by-design incomplete story) for an adaptation may surprise some people; Final Fantasy VII (1997) is the most well-known game in the series and is getting a huge boost of popularity next year, when the first part of a comprehensive remake of the game launches on PlayStation 4 in March 2020. However, FFXIV is the biggest-selling and by far the most profitable game in the history of the series, and many more current players will be familiar with its lore, story and characters.

The series previously flirted with dramatic adaptations in the form of the movie Final Fantasy: The Spirits Within (2000). The film was widely seen as a failure, bombing at the box office and getting a critically mediocre reception. A straight-to-DVD feature-length film, Final Fantasy VII: Advent Children (2005) was considerably more successful.

The Final Fantasy TV series will be co-written by Ben Lustig and Jake Thornton, who don't seem to have any credits of note between them. Sony are currently shopping the project to networks and streamers, although they face a tough market with many potential markets already developing epic fantasy projects of their own.
Posted by Adam Whitehead at 20:24