A Closed and Common Orbit by Becky Chambers

Lovelace, the former AI of the Wayfarer, has been given her own body and is now living undercover as a human on a remote settlement. She is adapting to life as a human by her friend Pepper, who as a former genetically-engineered slave knows a thing or two about having to overcome your past to achieve a greater future. But Pepper also owes someone a debt, one that will take her across the galaxy as a way of fulfilling it. 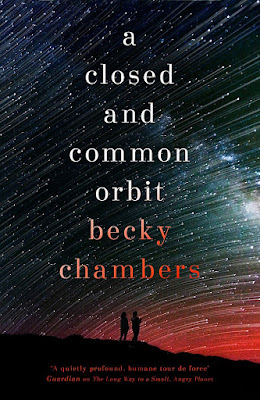 A Closed and Common Orbit is the second volume of the Wayfarers series, following on from The Long Way to a Small Angry Planet. It's not a sequel as such, picking up only on a single dangling plot thread from that book and expanding on several very minor characters, and can be read as a stand-alone novel.

The book is about many things, including friendship, humanity and what it means to be a person. There are human, AI and alien perspectives on this thorny question and on the ethical dilemmas involved. The story unfolds in two distinct threads, a current-day story about Lovelace adjusting to life as her new cover personality, Sidra, and an extensive flashback to Pepper's life as a slave and how she escaped. The story therefore unrolls in two directions simultaneously, backwards and forwards, until the two meet up satisfyingly near the end.

Like The Long Way to a Small Angry Planet, this is book is much more concerned with character, relationships and moral quandaries than it is in shooty action. There are a few tense moments and sequences, but the characters are rarely in physical jeopardy. This is a book much more concerned with the characters, their backstories and their motivations and how that impacts on important moral and ethical decisions they have to make going forwards. Both characters having two names - Lovelace/Sidra and Jane/Pepper - is also a nice clue that the characters are going on journeys as their identities shift to deal with the new worlds they find themselves in.

One advantage A Closed and Common Orbit has over its predecessor is that it is primarily and tightly focused on just two characters rather than half a dozen. This means that both characters get a huge amount of development and we become deeply immersed in their lives.

The weakness is that A Closed and Common Orbit is also very much a relaxed, chill novel without much in the way of drama. The decision to move away from space opera cliches like laser gun battles and explosions is laudable, but there are moments where you do feel like it could use a few more stakes. The few tense and dangerous moments that do occur take place in Pepper's flashback, where you already know she's going to be just fine.

A Closed and Common Orbit (****) confirms Becky Chambers' place as the natural heir to Lois McMaster Bujold in writing interesting, innovative science fiction which examines moral and ethical concerns and how they impact on characters, but those looking for action and dramatic events are best-served elsewhere. The novel is available now in the UK and USA.
Posted by Adam Whitehead at 12:59