It's been officially confirmed (after several days of rumours) that Rosamund Pike has been cast in the role of Moiraine Damodred in Amazon's Wheel of Time TV series. 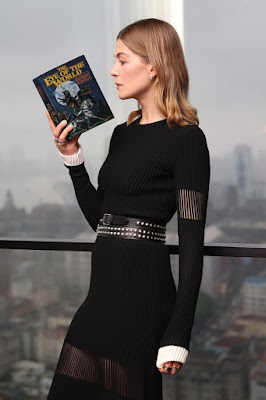 Pike is a veteran British actress who started her career with A Rather English Marriage (1998). She came to Hollywood attention by playing Bond girl Miranda Frost in Die Another Day (2002), Pierce Brosnan's final James Bond movie, and Jane Bennett in Pride & Prejudice (2005). Subsequent movies have included Doom, An Education, Wrath of the Titans, Jack Reacher and The World's End. She currently plays Lady Penelope in the rebooted Thunderbirds Are Go (2015-present).

In 2014 she achieved her biggest breakthrough by playing the role of Amy Dunne in Gone Girl, alongside Ben Affleck. She was nominated for an Academy Award for Best Actress, as well as Golden Globe and BAFTA nominations for the same role.

In The Wheel of Time, Moiraine Damodred is an Aes Sedai of the Blue Ajah. As an Aes Sedai, she can channel the One Power, a source of tremendous sorcerous power. As a member of the Blue Ajah, she specialises in intrigue, politics and causes. Twenty years before the events of the series, Moiraine learned a vital piece of information which has set her on a hunt across the continent known as the Westlands, accompanied by the Malkieri warrior Lan Mandragoran. The events of The Wheel of Time begin when Moiraine learns what she is looking for can be found in the Two Rivers, a remote part of the kingdom of Andor. Moiraine then becomes a guide and mentor for a group of young people she encounters in the course of her mission.

The Wheel of Time TV series is now in pre-production with production based in Prague in the Czech Republic (which is also expected to at least partly stand in for the city of Caemlyn). The team have recently been working on both casting and location scouting (most recently in Denmark, possibly for the Two Rivers). Filming is set to being in September for transmission in late 2020 or early 2021.
Posted by Adam Whitehead at 17:50

I hope they cast Nicholas Cage since he's on the front cover of The Eye Of The World.

Wow. This is the first moment that has made me think 'Wait, this is actually happening?'

This is really beyond expectations! So, So good! Pike has potential to be an excellent Moraine!