At 01:23:40, Moscow Time, on 26 April 1986, the core of Number. 4 Reactor at the Chernobyl Nuclear Power Station in the Soviet Union exploded. A vast fire took hold and started belching plumes of radioactive smoke into the air. Radioactive particles eventually fell as far afield as northern Scandinavia and Britain. In the aftermath of the disaster, nuclear experts were sent to the site to lead containment and clean-up efforts, among them Valery Legasov. Legasov's actions and those of the scientists with him helped prevent a turbine steam explosion of much greater proportions, and allowed the clean-up to proceed. But Legasov's investigation revealed a fatal design flaw in the reactor design, one still used at a dozen other stations across the USSR, and his struggle to warn the world and lead to reform was challenged by a bureaucracy where accountability and passing the buck are the norm, and truth and lies were seen as only theoretical concepts. 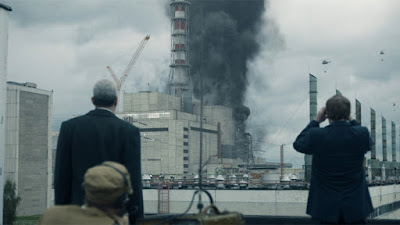 Chernobyl is a co-production between HBO and Sky TV which attempts to recreate the worst nuclear accident in human history, explain why it happened and what happened afterwards. Written by Craig Mazin (the Scary Movie and Hangover franchises, believe it or not) and directed by Johan Renck (Breaking Bad, The Walking Dead, Halt and Catch Fire, and music videos for New Order, Madonna, Beyonce and David Bowie), Chernobyl is an impeccably-researched series which veers between outright body horror, taut character drama and hauntingly beautiful scenes rich in atmosphere and melancholy.

The Chernobyl disaster in 1986 was one of the defining moments of the era. Years later, Mikhail Gorbachev admitted that it may have been the event that marked the beginning of the end of the Soviet Union, as the implacable visage of Soviet engineering competence was fatally cracked. Following the Three Mile Island incident in the United States, it caused the world to reassess its relationship with nuclear power and dramatically slowed the building of new reactors. To what extent this was an overreaction is something the series itself debates, with it noted that Soviet-era reactors lacked the containment vessels and other safety features enjoyed by Western designs that would have prevented the same kind of accident from occurring.

The series is focused on the real-life character of Valery Legasov, perfectly played by Jared Harris. Harris has been one of the most reliable and astute actors of modern times, fantastic in Mad Men, The Crown, Fringe, The Expanse, The Terror and many, many other productions, but he's not been a household name. Chernobyl should change that, and if Harris doesn't walk off with a ton of awards, there is no justice in the world. His more famous co-stars Stellan Skarsgård and Emily Watson are also utterly fantastic, and scenes between these three actors are worth their weight in uranium. The entire cast is excellent, with Paul Ritter (best-known in the UK for his comic role on Friday Night Dinner) particularly making the most of his small but crucial role as Anatoly Dyatlov, the assistant chief engineer whose bull-headed approach was at least partially responsible for causing the chain of events leading to the explosion.

The five episodes are divided broadly between two narrative strands. The first and most consistent focuses on Legasov's investigation, aided by Ulana Khomyuk (Watson), a composite character of a dozen or so scientists who worked on the disaster, and the attempts by Boris Shcherbina (Skarsgård) to give them political cover and allow them to work. The relationship between Legasov and Shcherbina is fascinating, moving slowly from mutual dislike and antagonism to respect and support with total conviction.

The second narrative strand is more of an anthology, following several characters whose lives are impacted by the disaster. These include Lyudmilla Ignatenko (Jessie Buckley), the pregnant wife of a fireman who works on the blaze on the first night and is subsequently moved to a hospital of horrors in Moscow; Andrei Glukhov (Alex Ferns), the head of a gang of miners drafted in to help contain the damage; and Pavel (Barry Keoghan), a young soldier called in to help clean out the evacuation zone of civilians. These subplots allow the sheer scale and scope of the disaster to be understood, and the way it affected millions of people.

The decision to start the first episode at the very moment of the explosion and then delve into the events afterwards feels a bit odd at first, but it turns out to be a stroke of utter genius, as it means we know about as much as Legasov as to what's happened, and learn about preceding events when he does. It's only in the finale episode, when Legasov has a full picture of events that the drama rewinds to the hours and days before the explosion and counts down to the event, allowing the sheer magnitude of the disaster to become more apparent to an audience who now knows that graphite-tipped fuel control rods are a bad idea and the significance of the safety test being run at the time of the accident.

Beautifully-written, impeccably-directed, cast to perfection and with a timely message on the intersection of science, the environment, facts, opinions, propaganda and the truth, Chernobyl (*****) sits comfortably alongside the likes of Threads and Edge of Darkness as fantastic examples of drama acting also acting as a powerful warning. It is available to watch on HBO in the United States and on Sky and Now TV in the UK. The Chernobyl Podcast, which goes behind the scenes of each episode in detail, is also essential listening.
Posted by Adam Whitehead at 12:35

I've watched the entire miniseries yesterday. It really is impressive, and very scary.
I was 9 years old when the accident happened and didn't fully grasp what was going on.
Realizing now that the catastrophe could have been even bigger had the turbine steam explosion taken place gives me shivers.

Excellent review as usual. Many thanks for linking to the podcast, I hadn't been aware of that one.