Angel is trapped in a coffin at the bottom of the ocean. Wesley, feeling betrayed by his friends, has turned into a hard-bitten, demon-killing mercenary. Cordelia is missing and Lorne has relocated to to Vegas. Connor, Fred and Gunn are carrying on the good fight, but outnumbered and outgunned there are limits to what they can do. As the gang set out to gather their friends, a much greater threat is gathering force and is about to unleash an evil upon the world that nobody, not even the demonic law firm Wolfram & Hart, are prepared to deal with. 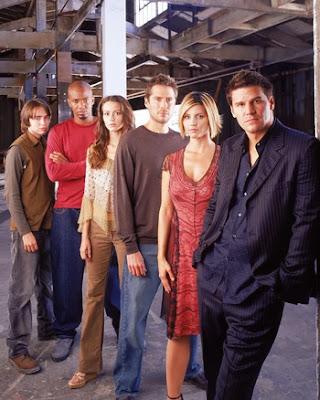 The fourth season of Angel is the most polarising. It's the show's darkest season, at times seemingly delighting in finding ways of sending characters already in dire straits to an even lower and more depressing state. However, it's also the most serialised season and the writers spend a lot of time delighting in one-upping one another with ever more elaborate and challenging cliffhangers and dramatic plot twists, most of which (just about) hang together.

It helps that the previous seasons established both this tight-knit group of characters and their enemies in Wolfram & Hart so well, so when the show rolls hand grenades into both camps in the form of "the Beast" (a seemingly unstoppable killing machine) there's a lot of good drama to be mined. Previously-established secondary characters are killed off at a rate of knots, and the show has to draft in some heavy guns from previous seasons (not to mention Buffy) to help tackle the threat, which makes the story feel genuinely high-stakes.

This year also benefits from better pacing than the third season, with a more heavily serialised arc split into chapters separated by stand-alones (which nevertheless further either characterisation or subplots related to the main arc). There's also a lot to do, from rescuing Angel to getting Wesley back on-team (or at least on speaking terms again) to identifying the Beast and formulating a plan to deal with it. More than most Buffy and Angel seasons, it earns its 22-episode running time.

Although the pacing is excellent and the general storyline very good - arguably the strongest season arc Angel ever tackled - some characters suffer, a lot. Behind-the-scenes shenanigans led to Cordelia's character being effectively thrown under a bus for most of the season and then shuffled off to Ambiguous Coma Land. Given Charisma Carpenter's excellent performance in the third season as she changed Cordelia into being the show's strong, moral centre, that's a bitter disappointment. Even worse is what happens to Angel's son, Connor. Connor is a moody teenager, which automatically makes him hard to like, but whilst the similarly-initially-unpopular character of Dawn on Buffy was allowed to change and grow and eventually earn her place on the team, Connor stays a mopey teenager all season. He also ends up being everyone's patsy, played like a fool by multiple enemies. His late-season redemption isn't enough to save the character and the producers have to shuffle him off the show in the most embarrassing way possible once they realise they can't redeem the character.

The fourth season of Angel (****) is divisive, being both a compelling rollercoaster of interesting storylines, and a sustained character assassination which renders at least two major characters unlikable for no real particular reason. It is available now as part of the complete series boxed set (UK, USA).
Posted by Adam Whitehead at 16:21