The Solar system is on the brink of war, with the numerically superior forces of the UN-controlled Earth and the technologically superior forces of the Martian Congressional Republic poised to unleash their ships and weapons. The crew of the starship Rocinante race to Io to expose the protomolecule conspiracy which has brought the Solar system to the brink, but face serious opposition. Meanwhile, the protomolecule fragment that landed on Venus has not been idle, and beneath the impenetrable clouds of the planet something is taking shape. 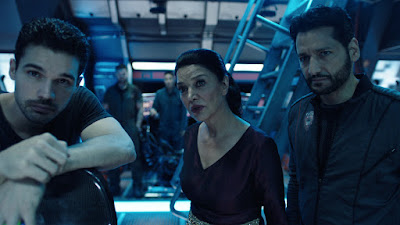 The first season of The Expanse was good. The second season was superb, the best season of space opera television since (at least) the second season of the newer Battlestar Galactica. The series, based on the novels by James S.A. Corey (aka Daniel Abraham and Ty Franck), paints a picture of a near-future Solar system riven by competing corporate interests, political tension and the dangers of unrestrained technological development. As well as the compelling main storyline, a host of finely-judged character arcs unfold, with the whole thing hinging on a (relatively) realistic depiction of Newtonian physics and space travel.

Season 3 continues in this vein. It is divided into two strands. The first six episodes round off the events of Caliban's War, the second novel in the series, and focus on the political showdown between Earth and Mars, which goes further than it does in the book. The latter seven episodes have the steep challenge of adapting the third novel in the series, Abaddon's Gate, in full. This breaks up the season quite nicely, with the first half being more of a political and war story and the second being more of a hard SF mystery, complete with multiple Big Dumb Objects to investigate and some excellent use of the laws of physics to provide obstacles to the characters.

There are also new characters this season, particularly Anna Volovodov, played with aplomb by genre veteran Elizabeth Mitchell (Lost), and the highly morally ambiguous character of Klaes Ashford, played with charisma by David Strathairn (Lincoln). Both are excellent additions to the cast. There is also a significantly expanded role for fan-favourite character Drummer, played by Cara Gee, a recognition of her superb performance.

On a thematic level, the show continues to contrast politics, science, war, expediency and ideology as clashing ideals, with even Holden's idealism and desire to "do the right thing" being scrutinised as not always possible (or even logical). Sometimes the good guys do bad things for the greater good (summed up by Amos's chilling, "I am that guy," in possibly the season's best single scene), sometimes people make what appears to be perfectly reasonable decisions which have horrendous consequences (the look on Errinwright's face when Earth's defensive railguns fail to shoot down a Martian nuke is priceless, and horrific) and life is messy and chaotic, with arguing over the way forwards. If anything, the show makes a case (through Avasarala) for political compromise and negotiation, no matter how boring, as it is preferable to people dying as a result of nationalist propaganda. There's a powerful message of hope in The Expanse which sometimes wins out over the cynical, morally murky manoeuvrings elsewhere in the story.

There's also the idea of the mystery, with the protomolecule and its later creation, the Ring, being the implacable Unknown which humanity is struggling to understand, and only doing so imperfectly and through its own morass of selfish, competing viewpoints. The Unknown hits back several times, reminding humanity of just how tiny and insignificant they are in the universe, something which gains added traction in the cliffhanger, which seems to be going for Arthur C. Clarke levels of awe and wonder.

Season 3 of The Expanse (*****) continues the show's streak of being the best SF series on air this decade, with outstanding production values, pacing, effects and acting. It is available to watch now on Amazon Prime (UK, USA). Filming for Season 4 is already complete and should air later this year, also on Amazon Prime.
Posted by Adam Whitehead at 15:31

Great summary! I have been regaling this series to my friends, as not many have heard of this excellent sci-fi series.