In sad news, it's been confirmed that actor Paul Darrow has passed away at the age of 78. A veteran of stage and screen, he will forever be associated with the infinitely-quotable character of Kerr Avon on cult space opera TV show Blake's 7.


Born in Chessington in 1941, Darrow studied at the Royal Academy of Dramatic Art. He picked up his first screen roles in the 1960s, appearing on medical soap opera Emergency - Ward 10 as well as contemporary series such as Z-Cars and Dixon of Dock Green. He also played the Sheriff of Nottingham in the 1975 BBC adaptation of The Legend of Robin Hood.

In 1970 he appeared as UNIT Captain Sam Hawkins in the second Jon Pertwee Doctor Who serial, The Silurians (Season 7). He returned to Doctor Who fifteen years later to play Tekker in the Colin Baker story Timelash (Season 22). He subsequently appeared as Kaston Ialdo in the Kaldor City sub-series of audio dramas (2001-04), set in the Doctor Who universe but not involving the Doctor.

In 1978 Darrow was cast as Kerr Avon in Blake's 7. Writer Terry Nation wanted a second lead, a coldly logical, amoral and cunning foil to the idealistic heroism of lead character Blake (Gareth Thomas). Darrow debuted in the second episode, Space Fall, and appeared in every subsequent episode until the end of the series; only Michael Keating as Vila appeared in more episodes than him. Darrow played Avon as ruthless, conniving and sometimes even treacherous, but with a massively-buried sense of decency that emerged at inopportune moments. Avon rapidly became the most popular character on the series, mainly thanks to his tendency to puncture the heroic speeches of his fellow rebels with cutting sarcasm or devastating one-liners.

Gareth Thomas left the series at the end of Season 2, leading briefly to conversations that the series might have to end (with the question, "Can you have Blake's 7 without Blake?" logically being asked). Avon was effectively promoted to lead character, continuing the revolution without its leader. Darrow noted this would cause a huge case of conflict for the essentially selfish character, and for the remainder of the series portrayed Avon as effectively cracking up from the stress caused by him trying to lead a cause he didn't always believe in. The writers picked up on this conflict and used it to drive some of the most dramatic moments in the series, culminating in the series finale where Avon mistakenly believes Blake has betrayed him and has an effective mental breakdown. The series ended after four seasons with Avon either dead or captured by the Terran Federation, a cliffhanger that was never resolved because the BBC oddly cancelled the show, despite huge ratings. 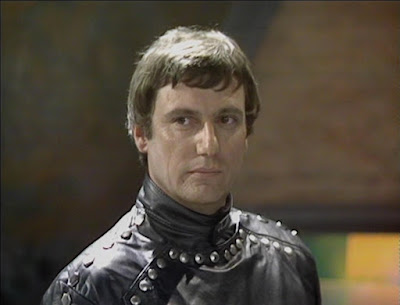 Following his work on Blake's 7, Darrow continued to act mostly in the theatre (where this writer caught him in an excellent staging of MacBeth in 1996), including a run as Sam Vimes in the touring play version of Terry Pratchett's Guards! Guards!

Darrow also developed a side-line in working in video games. He was particularly excellent as Walker in the superb 2001 strategy game Hostile Waters, where he acted alongside fellow Blake's 7 alum Glynis Barber and former Doctor Who Tom Baker, in a script by Warren Ellis. He also played Grand Moff Tarkin in Star Wars: Empire at War, Zarok in MediEvil and Overseer Tremel in Star Wars: The Old Republic.

However, Blake's 7 continued to overshadow Darrow's career, something he did not resent but in fact actively embraced. He acquired the rights to the series in the mid-1980s and worked on several projects to bring the series back, initially as a sequel but later as a reboot. At different times ITV, Sky TV, SyFy and Microsoft worked on different versions of a reboot but ultimately all passed on the project. Darrow continued to be involved in the production of audio dramas, several times reprising his role as Avon, and wrote a novel, Avon: A Terrible Aspect, in 1989. In 2006 Darrow penned his autobiography, You're Him, Aren't You?, which he also recorded the audiobook for.

Darrow suffered an aortic aneurysm in 2014, which required the amputation of both of his legs. Despite being restricted to a wheelchair, he remained active and appeared alongside fellow Blake's 7 actor Michael Keating on the quiz show Pointless just last year.

This is sad news, as Darrow's performance on Blake's 7 was a magnificent display of portraying a selfish, amoral and unlikable character but making the audience root for him anyway through sheer charisma. He will be missed.
Posted by Adam Whitehead at 16:58

I loved watching Blakes 7 when I was younger, and Avon was definitely my favourite character. I've always been disappointed that there was so little done with the concept after the BBC cancellation. Despite the limited budget hence quality that went with it, I always felt that it was more realistic than other science fiction because of the tension, arguments, and lack of alignment between the characters and the quality of the writing. Of course Paul Darrow was a large part of that in his performance. He will definitely be missed.

A fantastic actor and in playing Avon, created a character who resides in my memory many years later.