Spider-Man: Into the Spider-Verse

Miles Morales is navigating high school and the expectations of his parents, including his police officer father. When he is bitten by a radioactive spider, Morales gains powers similar to those of his idol, Spider-Man, and he decides to seek out the web-slinging superhero and ask him to be his mentor. However, archvillain Kingpin is unleashing havoc on New York City. As part of his plan, the walls between realities is breached and multiple "spider-people" from different timelines arrive. Morales has to negotiate an alliance between the dimensionally-maladjusted group if Kingpin is to be stopped. 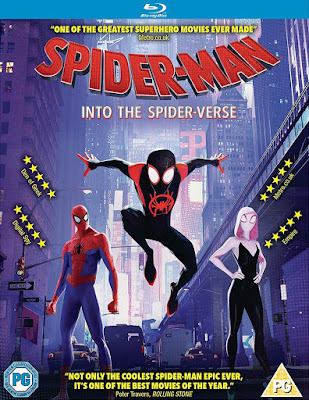 Into the Spider-Verse is the (count 'em!) seventh Spider-Man movie to be released this century, and, as with the character's addition to the Marvel Cinematic Universe (which is giving us a second live-action Spider-movie, Far From Home, just next month), some may be feeling a bit Spidered-out by this point. However, Into the Spider-Verse overcomes the danger of franchise fatigue to emerge as one of the best movies featuring the character to date.

Of course, it helps in keeping things fresh that Into the Spider-Verse isn't really about Peter Parker, who here is an experienced, veteran superhero who's been saving people for many years. Instead, our protagonist is Miles Morales. Morales had previously appeared in both comics and animation, but this is arguably his most significant moment as he is introduced to a much wider audience. Unlike Parker, whose status as an orphan with only one living relative is a key part of his motivation, Morales has much more of a traditional family background, even an extended one as his rebellious, graffiti artist uncle is a role model of his (to the disapproval of Morales' more straight-laced cop dad). However, Morales is struggling with making friends and getting a girlfriend, as is traditional in these types of coming-of-age stories.

In fact, Into the Spider-Verse does relatively little that drifts from the archetypal norm (save a willingness to perhaps kill a few more sacred cows than you'd expect, as the film revels in the fact it is not part of any previous continuity or canon) and many of the story beats are fairly predictable. Why that doesn't matter is because the film is a stunning, vivid and at times breathtaking piece of animation.

Into the Spider-Verse is a colourful, inventive and wild explosion of colour and form, the film fairly exploding off the screen with constant visual experimentation. The film's not quite so wild as to induce headaches, but for a film focusing on one of Sony's most lucrative characters, it's amazing how much freedom they allow the artists. You can pause the movie on almost any frame and it'd be a desktop-worthy masterpiece of an image. The visual splendour of the movie cannot be overstated.

This extends to the action, which is visceral and convincing, and is matched by the voice acting, which is uniformly outstanding. This is a film where every department gives 110% and it ends up on screen.

It is not a flawless, masterpiece, though. The film has no less than six different spider-protagonists, but really only gives three of them (Morales, Parker and Spider-Gwen) a lot to do; the other three characters have some funny moments and a few nice scenes, but otherwise feel like they're there to make up the numbers, and receive much less development as a result. The film may have been stronger by holding off on featuring a couple of the other characters until the inevitable sequel. Also, the film's fairly standard plot trajectory is on one hand a boon (the visual richness of the film applied to a convoluted plot may have ended up being a bit too much) but on the other does mean that the ending can mostly be spotted a mile away.

These should not detract from the fact that Into the Spider-Verse (****½) is exceptional fun, the closest we've come yet to seeing the spirit and ferocious energy of a comic book in motion, and arguably the strongest Spider-movie to date. It is available now in the UK and USA.
Posted by Adam Whitehead at 21:36