The Long Way to a Small Angry Planet by Becky Chambers

The crew of the Wayfarer are a tight unit with a complicated history. Rosemary Harper is a newcomer to the vessel, having to find a way of fitting into the crew whilst also avoiding her own past. But all of the crew of the Wayfarer have their secrets and their demons. When the ship accepts a commission to fly all the way to the galactic core (a journey of a year) to build a new hyperspace tunnel, these secrets will come spilling out. 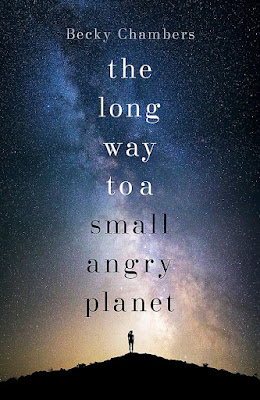 The Long Way to a Small Angry Planet is the debut novel by Becky Chambers and the opening volume in the Wayfarers series. The novel was crowdfunded on Kickstarter in 2012, a result of Chambers not being able to find a publisher for the book, and it has since been a huge success. It was nominated for the Arthur C. Clarke, British Fantasy Award and Kitschies, and its two sequels and the series overall have been nominated for Hugo Awards.

The Long Way to a Small Angry Planet opens in a highly familiar manner, with a cast of mistmatched characters living together on a spacecraft being established. From Blake's 7 to Farscape to Firefly to Colin Greenland's Tabitha Jute trilogy to Chris Wooding's Ketty Jay series, this remains a rich and engaging way of establishing character relationships and drama, and here is no different. What is slightly more unusual is the structure. There's relatively little in the way of space heroics or daring-do, with instead the focus being more on character exploration. Through successive episodes, we learn more about each of the characters on the ship: new clerk Rosemary, reptilian navigator Sissix, the medical officer/cook Doc Chef, the navigator Ohan, fun-loving engineers Kizzy and Jenks, buttoned-up algaeist Corbin, ship's AI Lovelace and Captain Ashby.

Despite it's moderate length (just over 400 pages), The Long Way to a Small Angry Planet is therefore more of a themed anthology or mosaic novel, a collection of short stories focused on each character with their shared mission (to the titular angry planet) cohering the fragmented narratives into a whole. It's a successful structure, meaning we get to know the crew in great depth before they come together to confront a crisis at their destination.

It's also a refreshingly non-violent space opera. There are moments of jeopardy and danger, but Captain Ashby is a pacifist who doesn't carry weapons on his person or his ship, so they have to think their way out of each situation rather than opening up with guns blazing. It's a more old-skool form of space opera in that sense, with people out-thinking their opponents rather than nuking them.

On the negative side, the chill pace of the novel means the ending explodes almost out of nowhere, with the entire plot wrapped up in near-indecent haste. That's not necessarily a huge problem - the book is very literally all about the journey, not the destination - but the ending of the story does verge on the perfunctory, although the individual character arcs do have satisfying endings. Some may also find it odd that we spend an entire novel building up the characters only to promptly abandon them: the sequels A Closed and Common Orbit and Record of a Spaceborn Few pursue (mostly) different casts of characters in other parts of the galaxy. However, the Wayfarers series is ongoing and we may revisit these characters further down the road.

The Long Way to a Small Angry Planet (****) is a highly entertaining space opera, with a laudable focus on rich characters and a refreshing desire to avoid the cliches of the subgenre. The book's relaxed pace and lack of tension may not be to everyone's liking, but it makes for a different and enjoyable focus to the book. It is available now in the UK and USA.
Posted by Adam Whitehead at 12:21

Email ThisBlogThis!Share to TwitterShare to FacebookShare to Pinterest
Labels: becky chambers, the long way to a small angry planet, wayfarers