Joy Division's debut album, Unknown Pleasures, turns 40 tomorrow. One of the most critically-acclaimed albums of all time, the record has withstood the test of time like few others. 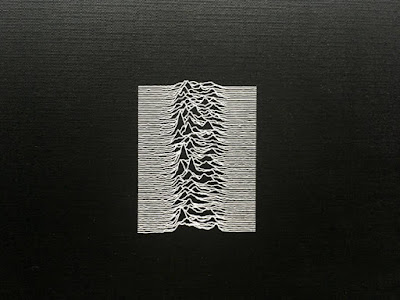 The band began life in 1976 when former school friends Bernard Sumner and Peter Hook attended a Sex Pistols gig in Manchester. The band only played for half an hour, but Sumner and Hook left and promptly bought instruments (Sumner an electric guitar and Hooky a cheap bass) and taught themselves to play. Within weeks they were putting together their first, halting compositions. They advertised for a singer and drummer and recruited charismatic, enigmatic frontman Ian Curtis and the relentless, machine-like Stephen Morris, completing their lineup. They started performing under the moniker Stiff Kittens, but soon came to dislike the name, so switched their name to Warsaw, under which they made their live debut in May 1977.

The band had befriended local superstars the Buzzcocks early on, which proved a boon when the Buzzcocks invited them to support them in local gigs and on tour. It wasn't long before music journalists started paying attention to Warsaw and gave them favourable write-ups in the press. This attracted the attention of London-based group Warsaw Pakt, who angrily demanded that they change their name. Exasperated, the band started looking for a new name and seized gratefully on a suggestion of Ian's: Joy Division. Ian, a history buff, had fished it out of a book on the Third Reich, with the name coming from the nickname from a group of Jewish women sold into prostitution for the edification of Nazi officers; needless to say, this connection soon became controversial, with the band being accused of fascism and attracting a neo-Nazi element (the latter was true, resulting in several violent clashes at gigs).

The band recorded their debut EP in late 1977, An Ideal for Living, which attracted rave reviews but also brought renewed criticism as the cover art depicted a member of the Hitler Youth. Stephen Morris, who vehemently hated the coverage, said that the band had a contrarian streak where they got annoyed with the Nazi criticism, so kept doing it to annoy people even more (later on the band recanted, although not before naming their next incarnation "New Order").

Throughout 1978 the band write and toured incessantly, building up a collection of songs for their live performances and constantly adjusting them based on audience feedback. This year was crucial for their development, as it saw them take on an experienced manager (Rob Gretton) and sign to the nascent Factory Records, TV presenter Anthony Wilson's publishing company. Wilson also featured Joy Division on his TV programmes. Music press coverage grew and became outright laudatory, with John Peel pushing the band hard on his BBC radio programmes.

The result was a frenzy of anticipation for the band's debut album. Recording it proved slightly stressful: Wilson assigned maverick, visionary producer Martin Hannett to produce the album. He'd already worked with the band on some songs for A Factory Sample (a collection of songs from Factory's line-up), but for the album he went Full Hannett on them. According to legend, he once had Stephen Morris take apart his drum kit and reassemble it with parts from a toilet; during another recording session he told him to take the drums up to the roof and record them in the open air. Hannett had a massive array of digital delay devices, drum machines and synthesisers which he insisted on using, which the band initially felt was slightly weird. Bernard Sumner was particularly impressed with the technical wizardry Hannett was displaying and became intrigued by the use of synthesisers (Sumner built his own synthesiser from scratch a few months later).

Hannett's peculiarities aside, the band were also pushed for time, as Factory had only paid enough money for the studio for three weekend sessions. As a result the entire album had to be recorded in just six days. To make matters worse, the band's time estimate for their songs proved overly generous, forcing Hooky and Morris to lock themselves in a room and bash out "Candidate" and "From Safety to Where" in short order ("Candidate" ended up being longer than planned, so "From Safety to Where" was booted from the album).

Eventually, after a great deal of stress, the record was completed. The band initially were bewildered by it. Live, they played the songs loud and aggressively, but Hannett had stripped the songs down and added a strange sparseness, as well as overdubbing parts with keyboards (on a couple of occasions, without telling the band first). Curtis was unsure about how his voice sounded, declaring that he sounded like Bowie, whom he hated (Curtis had actually been a Bowie fan, but Bowie wasn't particularly trendy at that moment in time). The band were somewhat unhappy with the record, but Wilson and the rest of the Factory team loved it. Designer Peter Saville created a cover which is arguably more iconic than the record: a visual depiction of the x-ray pulses from pulsar CP1919 (spotted by Sumner in a book on radio astronomy). When the album was released on 15 June 1979, it was an immediate critical success, acclaim which only continued to grow over the following months.

The band didn't release any singles from the record, at all, which severely damaged its commercial chances. Instead, they let the entire album stand by itself. This bolstered their critical integrity, but did mean for lean sales; the album sold roughly 15,000 copies in its first few months on sale and didn't trouble the UK Album Chart. However, the release of non-album single "Transmission" in September saw the album start selling in greater quantities. Word of mouth about the band, who were continuing to tour full-tilt in the meantime and begin working on songs for a follow-up, spread like wildfire. They recorded their second album Closer in London in March 1980, along with the single-only releases "Atmosphere" and "Love Will Tear Us Apart," which was already starting to tear up their gigs and remains their best-known and best-loved song.

The band seemed poised for greatness, but Ian Curtis's life was falling apart at the same time. His marriage was collapsing at the same time he was trying to start a new relationship and he had been diagnosed with epilepsy. The frequency and intensity of his epileptic fits had worsened to the point where it made his future in the band doubtful. On 18 May 1980 he committed suicide at his home in Macclesfield. His shocked bandmates eventually rallied as New Order and began a new career that was every bit as remarkable as their incarnation as Joy Division. Unknown Pleasures finally got its first single in late 1980 when "She's Lost Control" was paired with "Atmosphere" as a double A-side release. The album also finally cracked the UK Album Chart when publicity in the wake of Curtis's suicide pushed the band into higher levels of public awareness.

At 40, Unknown Pleasures still sounds alien, odd and slightly ethereal, a result of Hannett's far-ahead-of-its-time production making the record sound much more recent. Its sparseness, initially derided by the band (until Hooky, grudgingly, admitted twenty years later that it was genius), gives the record a feeling of alienation at odds with its punk contemporaries, and makes it more timeless. But the production can only do so much. It's the four songwriters who take centre stage, with Hooky's pounding, melodic bass lines not only supporting punchy lead guitar riffs from Sumner but taking the lead on several songs (such as "Disorder," where the bass is often mistaken for the guitar, and the high-fret playing of "She's Lost Control"). Ian Curtis's deep, slightly off-kilter vocals go through a battery of strange treatments, a lot of them Curtis's own ideas; on stage he'd plug his microphone into a synthesiser to create odd effects for his vocals, like the multiple layering on "She's Lost Control." Morris's rhythmic, pounding drums, executed with beyond-robot efficiency, make it impossible to tell when he's playing and when a drum machine kicks in. It's a remarkable achievement, bearing in mind three years later these guys didn't know how to play any instrument, and a year earlier they were still blasting out fast-moving 2-minute punk songs.

To this day the argument will rage whether Unknown Pleasures or Closer is the stronger album, but it is clear that the two-punch release of the two records barely a year apart represents a musical achievement to rival any other, and Joy Division will endure for many decades to come.

At the moment the Joy Division YouTube page is releasing brand new music videos for each of the ten tracks on the record. The rest should be released over the coming days.
Posted by Adam Whitehead at 15:57

Can you imagine any group today deliberately using nazi symbolism to troll journalists, when they chose a cool sounding name.
They wouldn't be able to do anything but apologise to the outrage mob 24/7.

It was a huge problem back then.

More hilarious is the fact that, with Curtis (their resident expert on WWII history) gone, they didn't realise that New Order was a Nazi term at all, as they'd picked it out of a magazine article showed to them by their manage Rob Gretton, and it was either New Order or The Witch Doctors of Zimbabwe (which at least two of the team really liked, for some reason). Whether Gretton (who could be an arch-troll bullshitter) knew is a subject of some debate.