Ibram Gaunt is now the First Lord Executor of the Sabbat Worlds Crusade, the adjunct of Warmaster Macaroth. His unit, the Tanith First and Only, is now among the elite forces defending the forge world of Urdesh from the invading Chaos troops under the command of Anarch Anakwanar Sek. Urdesh has become the crucible for the entire war, with both Macaroth and Sek in-theatre and determined that only one will walk away. But the battle for Urdesh marks another flashpoint, the awakening of a threat that has been growing within Gaunt's own ranks for decades... 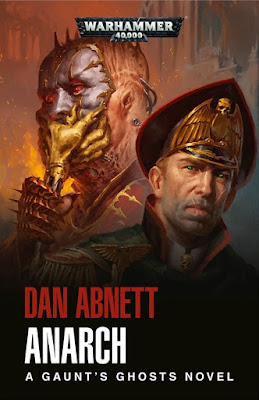 I imagine the pitch meeting for Anarch went a bit like this:

Anarch is a book that takes absolutely no prisoners, preferring to slice them into a thousand pieces of screaming blade death instead. The fifteenth Gaunt's Ghosts novel and the concluding book in the "Victory" arc takes a whole host of character arcs, subplots and storylines that have been percolating across the entire series (a long time; the first novel, First and Only, was published twenty years ago) and sets about tying them off with utterly ruthless, remorseless efficiency.

The story unfolds on several fronts. In the first, one of the First's most veteran soldiers, Mkoll, has been taken prisoner by the Archenemy and subjected to interrogation. This storyline follows Mkoll as he endures the trials of captivity and tries to find a method of escape. In another, enemy troops who infiltrated the capital of Urdesh in the previous novel, The Warmaster (to which this is less of a successor and more of a direct continuation) set about attacking Imperial forces whilst a special, elite unit tries to steal back the vital artefacts seized in Salvation's Reach. Different companies of the First have to blunt both attacks, which is where we get a lot of "classic" Ghosts action: last-ditch plans with little chance of success, heroic holding actions, brave last stands, improvised defences etc. This is all stirring stuff, although the body count is higher than some may be expecting.

Where the book goes cheerfully nuts is in the supposedly impregnable Imperial compound itself, when Abnett reveals a hitherto unknown talent for full-on, Event Horizon levels of body and existential horror. Not only is the battle in the undercroft of the palace utterly horrific and surprisingly visceral, but it's also ruthless on a scale we've not seen before in this series. Gaunt's Ghosts has occasionally played into the long-running military series cliche of killing off barely-named recruits and background soldiers whilst major players live to see another, lucrative day, with the occasional major death to keep things fresh. Anarch cheerfully says to hell with that and starts scything down major, long-running characters with at times almost wild abandon.

Killing characters for the sake of it can be rather pointless, but here Abnett gives almost each death meaning and resonance, concluding storylines stretching back as far as the first novel but particularly from the third, Necropolis (to the point where a re-read of Necropolis, or at least reading through a detailed plot summary, may be advisable to refresh the memory). Not only do some old favourites bite the bullet in this book, but some other characters, long missing on side-adventures, reappear and rejoin the team in this novel, which at least helps balance things out. Still, things will never be the same again for the Ghosts after this book, always a relief in a long-running series where the temptation to not shake things up and keep playing it safe must be strong.

Anarch (****½) is one of the finest novels in the entire Gaunt's Ghosts series, being atmospheric, foreboding, horrific and fantastically-written, as well as featuring Abnett's signature excellent action set-pieces and strong characterisation. It brings the entire series to a climax but not a conclusion; the Crusade is not yet victorious and more battles lie ahead. Abnett is busy helping finish off the Horus Heresy mega-series and then his own Bequin trilogy, so it may be a few years before we rejoin the Ghosts, but Anarch leaves the series on a fine - if bittersweet - note. The novel is available now in the UK and USA.
Posted by Adam Whitehead at 14:38