A massive space hulk, an accumulation of thousands of vessels long lost to the warp, has emerged in the Realm of Ultramar, close to the agricultural world of Iax. The Ultramarines land on the hulk in force, planning a thorough reconnaissance before destroying it. They find signs of the taint of heresy, but also incredibly technological resources which could reinforce their battle against the enemies of mankind. Reluctantly, Chapter Master Marneus Calgar allies with both the Inquisition and the Adeptus Mechanicus to explore the hulk and seize its secrets in the name of the Emperor. 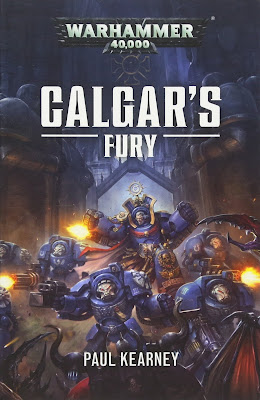 Calgar's Fury is the second book in a trilogy which explores the history and backstory of Marneus Calgar, Chapter Master of the Ultramarines and one of the most famous warriors in the Warhammer 40,000 setting. The first book, Calgar's Siege, depicted how Calgar stood fast against the orks at the gates of Zalathras in a massive siege involving tens of thousands of troops.

The scale of Calgar's Fury is smaller, with a hundred or so Space Marines and allies dropped onto the space hulk Fury to delve into its secrets. This makes for an immediately much more claustrophobic and tense story. Exploring a space hulk has been a cornerstone of the Warhammer 40K setting ever since the release of the Space Hulk board game in 1989, followed by the Space Crusade game of a year later. Drawing influences from the likes of Aliens and Starship Troopers, the trope pits well-trained and well-armoured troops against overwhelming odds in tight corridors on an ancient spacecraft that could collapse at any time.

Kearney enjoys himself to the full here, painting the various characters in great depth and taking advantage of the competing interests (the Ultramarines, Inquisitions and Adeptus Mechanicus each have their own agenda) to create drama among the human characters. There's also a refreshing approach to the cliches of 40K here. Most space hulk stories pit humans against genestealers (an offshoot of the tyranids) or Chaos, but Calgar's Fury blurs the lines between the factions and makes for a more morally murky and uncertain story, an area where he thrives.

There is indeed a lot of action and fighting in the book, but it takes a surprising amount of time to arrive. The opening section of the book is a masterclass in slowly building, mounting dread as the Imperial characters investigate the mystery of the hulk and only gradually become aware of what it is they are dealing with. There are also several splendid plot twists and reversals that keep the reader guessing at what is going to happen next. The pacing is excellent, with Kearney letting the story last as long as it needs to and then clearing out without much fuss.

Calgar's Fury (****½) is a spendidly superior slice of science fantasy, tense and atmospheric building anticipation where the action, when it arrives, does not disappoint. It is available now in the UK and USA.
Posted by Adam Whitehead at 13:46