Year of the Rabbit: Season 1

London, 1887. Detective Inspector Rabbit is a hard-drinking copper who hates playing by the rules. However, his rowdy behaviour and the odd tendency of his heart to stop beating at inopportune moments encourages his boss to assign him a new partner, the young, posh and unstoppably chipper Strauss. He is also joined (initially unofficially) by Mabel, who harbours ambitions to become the first female police officer ("fopper...lady-filth?") in London. The trio tackle a series of serious crimes, unaware that they are involved in a much more serious and large-scale operation which may imperil all of the East End. 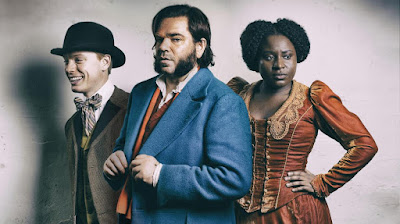 2019 may not be the technical Year of the Rabbit, but it may be the Year of the Berry. Matt Berry has been a British comic institution for well over a decade, due to his memorable appearances on everything from Gareth Marenghi's Darkplace to The IT Crowd to Toast of London. This year that has stepped up a notch with his appearance on the What We Do in the Shadows TV spin-off, which has brought his madcap comic genius and impeccable vocal gesticulations to a wider international audience, as well as this new sitcom for Channel 4.

Year of the Rabbit is a period comedy with decent production values, recreating the streets of Victorian London with impressive skill. The cast is also exceptional. As well as Berry as Rabbit, up-and-comers Freddie Fox and Susan Wokoma play Strauss and Mabel with gusto and conviction. Elsewhere, more veteran hands can be found in the form of Alun Armstrong as Rabbit's long-suffering boss, Paul Kaye as his arch-rival detective Tanner, Keeley Hawes as recurring semi-villain Lydia, Ann Mitchell as tough innkeeper Gwen and Sally Phillips as a Princess of Bulgaria (with a truly outrageous accent). There's also blink-and-you'll-miss them camoes from Berry's new Shadows bosses Jemaine Clement and Taika Waititi.

The behind-the-camera firepower is also impressive. Andy Riley and Kevin Cecil are veteran comic writers who've had a hand in The Armstrong and Miller Show, Black Books and HBO's Veep, and are more than capable of delivering great comic lines.

It's therefore a shame that Year of the Rabbit doesn't quite live up to its billing. There are usually several good laughs per episode, but there's also a lot of jokes that don't really land. There's also a curious overreliance on swearing. Swearing can be funny when deployed judiciously, especially combined with some great use of Cockney slang (one of the show's better gags is that whenever a new piece of technology is introduced - the telephone, electric street lights - a group of Cockneys must gather to decide on the appropriate slang term), but in Rabbit it often feels like it's trotted out whenever the writers run out of ideas, which is a dismaying several times per episode. There's also a couple of running gags that don't really work, especially an odd one about Rabbit's eyebrow that I thought was a setup for some kind of grand revelation, but nope, at least not in this season.

The season does generally improve after the opener, which can best be described as mildly diverting rather than required viewing. The series also goes quite a long way on Berry's rich voice booming out ridiculous declarations, albeit this time in Cockney. Hawes's superb ice-cold villainy is also excellent, and the show does get a lot of mileage out of the horrendous conditions of the time, slipping through a surprising amount of period detail in the gags, such as characters pondering if they've been struck by love when in fact they're sniffing in mercury fumes from a poorly-ventilated shoe factory.

Ultimately, the first season of Year of the Rabbit (***) feels a bit undercooked. The premise is excellent, the acting talent is certainly there, but the writing needs to be tighter with less reliance on the old stand-bys of swearing and tired running gags. There's enough solid jokes to make viewing worthwhile, but it's not, at this stage, essential viewing.
Posted by Adam Whitehead at 22:19

Email ThisBlogThis!Share to TwitterShare to FacebookShare to Pinterest
Labels: channel 4, matt berry, year of the rabbit