Entrepreneur Johnny Rose has built a vast fortune after becoming one of the most successful video store chain owners in history. Unfortunately, his accountant was somewhat less honest and has absconded with the tax money. As a result, the Rose family are made destitute and have to relocate to the one asset they've been allowed to keep: the town of Schitt's Creek, which Johnny once bought on a whim because he thought the name was amusing. Forced to start again from scratch, Johnny, his wife Rose and grown-up children David and Alexis move into the Creek's motel and try to rebuild their lives. 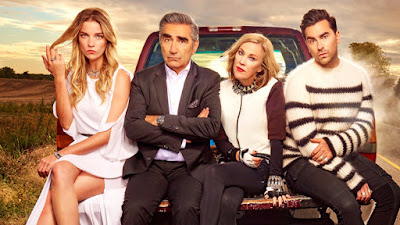 Schitt's Creek is one of the beneficiaries of the new age of streaming media: a small-scale Canadian sitcom which slowly built up a small cult following over several years before finally exploding thanks to Netflix buying the international rights, bringing the show to a much wider audience.

The series is built on a classic sitcom conceit, that of "riches to rags," a formerly successful family reduced to nothing and forced to start again from the bottom. Previous sitcoms have played with this idea, such as To the Manor Born and later episodes of Only Fools and Horses, although Schitt's Creek engages with it with head-on directness, reducing the central four characters to living in adjoining motel rooms in a tiny town in the middle of nowhere. As usual with Canadian shows trying to appeal to an American audience, there's some ambiguity about the setting, with not even the state/province or country being mentioned, but that really doesn't matter.

Central to the show are the Rose family: hapless patriarch Johnny Rose, played with exasperated, masterpiece comic timing by Eugene Levy (American Pie); his wife, a former soap star named Moira, played with impeccable vocal stylings by Catherine O'Hara (Home Alone, Six Feet Under, Best in Show); his son David, played by his real-life son Dan Levy (who is also the showrunner and executive producer of the show); and his daughter Alexis, played by relative newcomer Annie Murphy.

Eugene Levy and Catherine O'Hara's formidable experience and comic firepower brings a lot to the series, but Daniel Levy and Annie Murphy more than hold their own, and the four quickly develop a real chemistry and rapport that is frequently hilarious, and captures the bickering of families quite well. This is important because the show's set-up - in an attempt to avoid cliche - establishes both the Rose family and the people of Schitt's Creek as oddballs who are not always likeable. Whilst this avoids cheesy arcs like the salt-of-the-earth Creekers teaching the Roses the meaning of friendship, it does risk the show not giving viewers a good enough reason to tune back in. In particular, the gratuitous self-obsession of David and Alexis can be a little over the top in the first three or four episodes.

Fortunately, things calm down before the first season is even halfway over, with the viewer siding with the family over the bizarre behaviour of the Creekers (particularly the oft-inappropriate activities of mayor Roland Schitt, played with jovial annoyance by Chris Elliott) and then with the Creekers over the more delusional activities of the family, who sometimes forget they are no longer multi-multi-millionaires. Character growth is an important part of this, as Johnny's initial despair over being made penniless soon turns to a kind of delight at the prospect of having to prove himself again, this time in older age (which leads to people underestimating his business acumen). Moira's dislike of no longer having the rich and famous on speed dial likewise translates into a growing appetite to dominate the town's cultural and political scene, but also a growing humanity and desire to help her newfound friends improve themselves. David's selfishness is rapidly overcome by his friendship with hotel receptionist Stevie (a magnificently cynical Emily Hampshire), which helps him become a more selfless person. Arguably, it's Alexis who takes the longest to develop as a character, but a perfectly-judged arc in which she comes to realise the consequences of a horrendous relationship mistake she made in the first two seasons and tries to reverse it sees her also become a more interesting figure later on.

The show is divided into both individual episode storylines, in which, say,  Moira jumps on a chance to rebuild her acting career by appearing in a tacky winery advertisement, or Johnny and Stevie try to organise an alliance between the hotel and a local golf course, and longer season-spanning arcs, revolving around the opening of a new business or an impending election or wedding. These give each 13-episode season (of just 22 minutes each) a narrative impetus that is often lacking from sitcoms, making it more binge-worthy than most. The way the characters evolve on-screen is also very well-done, giving the show an overall direction and arc that's very satisfying.

The first five seasons of Schitt's Creek (****½) evolve from a somewhat creaky start into a compelling comedy show, featuring laughs, drama and occasional pathos. This is a hidden gem that's well worth catching up on ahead of the show's sixth and final seasons, which will start airing in Canada later this year and on Netflix internationally next year.
Posted by Adam Whitehead at 14:27

I love Chris Elliott, Eugene Levy, and Catherine O'Hara, but I gave up after two episodes. It was just too depressing and the characters were too unlikable to watch a whole series. After reading your review, I'll give it another chance.

Thanks for the review! I am Canadian and I have never seen the show. Now I have to binge watch it!