LORD OF THE RINGS TV series to film in Auckland, New Zealand

Contrary to previous rumours that Amazon's Lord of the Rings: The Second Age TV show was ditching New Zealand for Scotland, it's now been revealed in the New Zealand trade press that "a huge part" of the production for the new show will be based in Auckland. 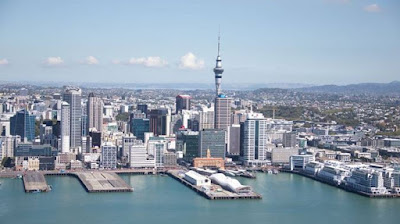 According to reports, pre-production has already been underway for a year, with sets being built and studio space secured ahead of the start of filming, reportedly in August.

The filming of both Peter Jackson's Lord of the Rings and Hobbit film trilogies was based in New Zealand's capital, Wellington, some 300 miles further south.

The report suggests that there may be additional filming elsewhere, although realistically it seems unlikely that production will be occurring on two completely opposite sides of the globe. However, Amazon have not yet formally confirmed shooting locations.

The new TV series will be set in the Second Age of Middle-earth's history, some 5,000 years before the events of The Lord of the Rings, although the precise time period is yet to be confirmed.
Posted by Adam Whitehead at 23:42

Wait, what? They start filming in less than 2 months ? But there haven't been any casting announcements yet !