Salute the Dark by Adrian Tchaikovsky

Spring has come, and the war for the Lowlands has resumed. A freshly-reinforced Wasp army is marching on Sarn, whilst a newly-assembled force is preparing to assault the Mantis-held woodland of Felyal and clear the coast route to Collegium. With the chances of victory hanging in the balance, Stenwold Maker embarks on a daring diplomatic mission to the Dragonfly Commonweal, hoping to convince them to attack the Wasp Empire whilst their attention is elsewhere. Meanwhile, Nero and Taki are returning to the Exalsee to try and arrange the liberation of Solarno. 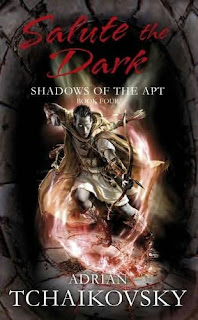 Elsewhere, other events are coming to a head. Tisamon's path leads him to Capitas for an attempt on the Wasp Emperor's life. Uctebri, now master of the Shadow Box, is preparing for the culmination of his own plans. And Cheerwell sees an opportunity to tear apart the Empire from within, but finds that old allies now see her as a deadly enemy and traitor...

Salute the Dark is the fourth book in the Shadows of the Apt series and whilst it isn't the conclusion of the whole series (which will run for ten books), it is the culmination of the first major story arc. Enough closure is given here so that the reader can pause before reading the next book in the series (Books 5-7 form a trilogy of their own within the larger series). Events that Tchaikovsky has been laying the ground for since the first book finally take place and some questionable earlier storytelling decisions are here explained fully. Whilst there's a large amount of military activity going on in the fourth volume, it isn't as overwhelmed by it as the second book was, and there is a good mix between the war scenes, character-building and political intrigue. Thalric's return to the centre of attention is well-handled, and characters like Cheerwell, Tisamon and Salma are all developed impressively. 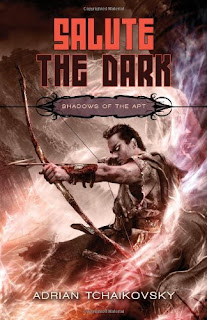 The main startling thing about Salute the Dark is the death toll. Perhaps aware that the number of characters was getting extremely large, Tchaikovsky takes a scythe to the cast with enthusiasm, killing off major and minor characters in a bloodbath that even George R.R. Martin might find a tad excessive. This gives rise to a genuine feeling of unpredictability and tension as you don't know who's going to be offed next. Some of the deaths fall a little flat, as they're minor characters who haven't had much screen-time, but there's enough major ones to be surprising.

The book's conclusion is well-handled, giving a good explanation for the pause in hostilities whilst laying just enough groundwork for future stories to make you want to pick up the next book without being left on a tedious cliffhanger.

Salute the Dark (****) is the best book in the series to date, featuring impressive developments in the story, the worldbuilding and characters. It is available now in the UK and USA.
Posted by Adam Whitehead at 14:08

Email ThisBlogThis!Share to TwitterShare to FacebookShare to Pinterest
Labels: adrian tchaikovsky, salute the dark, shadows of the apt