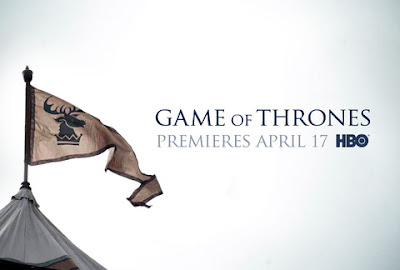 EDIT
Maybe not 'nuff said. The TCA Thrones panel is currently ongoing and Winter is Coming is live-tweeting the event. Highlights so far: Peter Dinklage had actually read the first book before accepting the part of Tyrion. Sean Bean didn't know he was a top choice for the role of Ned. (Executive producer) David Benioff wishes he'd never said the series was, "The Sopranos in Middle-earth." Bean feels that Boromir and Eddard are somewhat different characters, but he does enjoy playing with swords and riding around on horses. HBO were completely blown away by the interest and profile of the series, saying it's put everything else they've worked on recently, including Boardwalk Empire, in the shade.

Sean Bean: "The amount of production value put into this was incredible. Unlike anything I've ever seen, including Lord of the Rings."

A new trailer was shown just before the panel. Unlike yesterday's huge preview, this one doesn't have any copyright-troubling music so should be released publicly at some point.

A representative of Random House at the event has also said that there will be a formal announcement about the publication of A Dance with Dragons, 'soon'.

EDIT #2
Over the weekend of the TCA and at a signing in Pasadena yesterday, Martin stated that he was very close to delivering A Dance with Dragons, and indeed may have done so already if not for his illness.

Please could you give a citation or a more direct reference to that claim in your second edit? Thanks!