The rumour mill is reporting that the Wachowski Brothers and Keanu Reeves have met up to discuss a new two-movie Matrix project. The new films would be in 3D and would probably feature bullet-time and further the thoroughly confused mythology of the second and third movies. 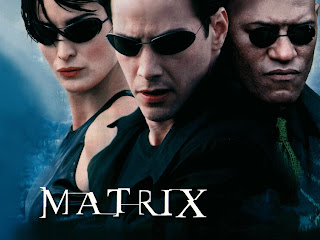 My enthusiasm for this news is sorely lacking. The first film was solid, the second was rather boring and the third fell flat but was livened up by the battle for Zion (just don't ask why the defending battlemechs didn't have any armour or protection for the pilots). A fourth and fifth instalment would seem to be totally superfluous, especially if it means they resurrect Neo and invalidate his sacrifice from the end of the third film. Still, this is just a rumour so far.
Posted by Adam Whitehead at 14:41

Email ThisBlogThis!Share to TwitterShare to FacebookShare to Pinterest
Labels: news, the matrix

As long as we get more women clad in latex/PVC/leather, I don't see the problem ;) Nah, just kidding (About the not seeing a problem, the other bit is a must).

I thought the Matrix films - whilst watchable - were always too 'big' for their boots, and they ended up frying my brain. I think I watched all three in the space of three days, and by the end of it my brain had just given up on me.

Well, here's to hoping they learn how to create a plot.

Sometimes it really seems like fresh and original ideas in fantastic cinema are few and far between now. In the 80's it seemed like we had several good sci-fi films every year. Now we maybe get a few good, truly good, sci-fi films in a decade.

hmm...Why didn't the battlemechs have armour?

p.s. Recently re-watched All three and they do hang together a bit better now time has passed. Some things still need explaining though.

The first film was okay . . . if you could get past the hokey premise of human batteries.

My favorite is actually the second film. It has a great deal of action, regrettably interspersed with a lot of annoying dialogue.

The third film is pretty terrible. Stupid battle scenes, including the weird "Matrix Ball Z" battle at the end between Neo and Agent Smith.

I agree. It was already going too far with numbers 2 and 3. Went from innovative to beating a dead horse. Although, sadly, I'll probably still watch these...but not in theaters! :D

I thought the third part was the best one, sans the battles and the special effects which felt completely useless. I found the notion of Smith infecting a human fascinating and I would have dedicated a movie to that idea alone. After all, when Smith discovers its human identity, he becomes a person. I actually thought that Smith would defeat Neo and take over the Matrix, while the living Smith would save the day.

Apparently it was all rumour, Keanu reeves was never in london, where he he presumably talked about Matrix 4&5.

Forget the matrix. The Walcholski's Speed Racer is where it's at. Sorely underrated film