RED DWARF to return for a new series

Actors Craig Charles (Lister) and Robert Llewellyn (Kryten) have confirmed that Red Dwarf will be returning for a new, six-part series. The new series will be recorded - again in front of a live studio audience if possible - between November and January and will air in mid-to-late 2012 on the UK satellite/cable channel Dave. 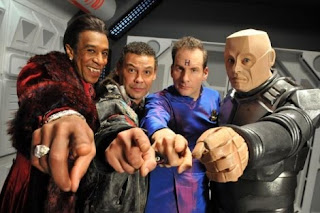 The classic Red Dwarf line-up: Cat, Lister, Rimmer and Kryten.
Red Dwarf's last full season, its eighth, aired in 1999. The producers subsequently spent a long period trying to develop a movie version which never materialised. Dave commissioned a new, three-part TV special called Back to Earth, which aired in 2009 to smash ratings (beating both BBC-2 and Channel 4, free-to-air channels). The success of the specials has now convinced Dave to develop a longer series in the spirit of the original series. Craig Charles has said that they're hoping to recapture the 'classic' Dwarf feel of around Season 5 of the original run. Llewellyn also confirms the hope to film the episodes live, but this may prove untenable if too much information leaks via the Internet.

It's been confirmed that the four central castmembers - including Danny John-Jules as the Cat and Chris Barrie as Rimmer - will return, with no decision made yet on other recurring characters from the original run. However, Norman Lovett, who played the ship's AI Holly, is unlikely to return given his recent criticisms of the show and his decision not to play the character again.

Red Dwarf was a classic series in its heyday, but I must admit this news fills me with trepidation. Back to Earth was terrible and Seasons 7-8 of the original run were very poor. If original writer Rob Grant (who left after Season 6) was to return as well that would restore a lot of confidence in this project. However, if Doug Naylor can find a good writing partner for the new series, it could turn out okay. I also hope Dave are putting a decent amount of money into the project, as Back to Earth suffered from its near-zero budget.
Posted by Adam Whitehead at 09:18

Maybe they could bring back Hattie Hayridge as the female Holly?

Trepidation is putting it politely - me, I'm imagining now how they're going see fit to shit all over my childhood this time around.

Really, I know the creators don't have anything better to do, but please: leave well enough alone, eh?

Series 2 was the best, series 3 was pretty good and it started going downhill after that.

RD started off a a sci-fi comedy and finished up as a comedy sci-fi, if you see the distinction.

All the original humour, take for example the best episode, series 2's Marooned, was from situation and dialogue but this turned into endless crap "Space Corp directive" gags later on. In many ways, Kryten was the beginning of the end.

This show was completely overrated in the first place.