The Walking Dead: Safety Behind Bars by Robert Kirkman

Rick Grimes and his band of survivors have found a promising safe haven: a well-defended prison with lots of fences, gates and other areas where the zombie menace can be contained. Of course, the prison itself has to be cleaned out of zombies first, and the surviving inmates have to be negotiated with. Eventually it looks like the gang has a new home...but a spate of murders suggests this might not be for long. 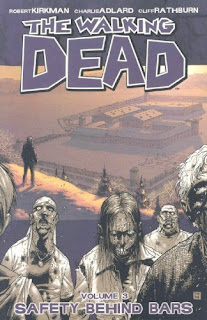 The third volume of The Walking Dead has our heroes reach the next stage of the traditional post-apocalypse, survival horror narrative: having survived the road trip they're now fulfilling the 'living in a safe haven with other survivors' trope. As usual, Kirkman plays the cliches pretty straight, to the point where there is some enjoyment found in identifying which character is about to be offed next by the serial killer or the zombies, which other one is about to crack up next and which one of the new characters is a good guy and which is a psychopath. Kirkman's writing steps up a notch here with more focus on character-building and giving the protagonists more depth. The book ends on a cliffhanger with two groups facing off against one another, but both sides are pretty justified (from their own POVs) for why events have built to this impasse, with bad calls and mistakes from both parties.

There's some other nice ideas here, including impressively logical story developments. Volume 2 saw our heroes split into two bands with the final parting appearing to be permanent. However, with the discovery of the apparently zombie-safe prison not far up the road, the first group nips back to tell the second about it and they agree to re-team up. This is not satisfying from the POV of emotional drama, but is a pretty sensible and realistic thing to do (though it probably worked between on the monthly book, when the separation and reunion were separated by months, rather than in the collected edition where it's a few minutes). There's some more entertaining zombie kills and effective action beats.

Where this edition really succeeds is in deepening and darkening the story beyond its predecessors. The serial killer story is disturbing, with some sick moments showing that other humans may be more dangerous than the zombies to the survival of the group. There's also a few other storylines that delve into the more psychological aspects of trying to survive in a dying world, showing the writer flexing his muscles and trying out some different and interesting techniques this time around.

Some of the same weaknesses from before remain. Dialogue is still patchy, with a tendency towards over-explaining things, and the artwork is still variable (though better than the second collection), with again the zombies being well-portrayed and the main characters less consistently so.

Still, Safety Behind Bars (***½) shows the story developing along the right track. It'll be intriguing to see where the story goes next. The graphic novel is available now in the UK and USA.
Posted by Adam Whitehead at 14:36

I've been fairly impressed with what the writer has done with this entire series. I've been reading comics off and on since I was a little kid and I have to say this is one of the best I've ever read.

Not to give away any spoilers, but the whole time at the prison is very good zombiegeddon rpg style stuff. He usually thinks in terms of realism when writing his stories and that really works well for a gamer (like myself) reading it.

Haha, I like how you see the same flaws in the series as I do. I think The Walking Dead is vastly overrated, even though it does get better at a certain point...