Elijah Wood to appear in THE HOBBIT?

Strong rumours are circulating that Elijah Wood will be reprising his role as Frodo Baggins in the upcoming two-movie adaptation of The Hobbit. You may be thinking, "Er, hang on..." at this point, but apparently the films will use a framing device with Frodo consulting the Red Book of Westmatch (which we see Bilbo working on at the start of The Fellowship of the Ring and Frodo at the end of The Return of the King) to learn more about Bilbo's adventures. 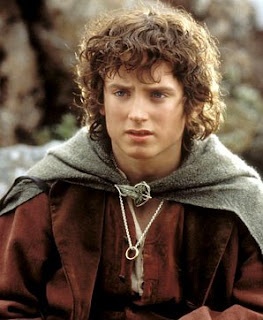 This sounds somewhat fair enough, tying the new films back to the Lord of the Rings trilogy for audiences unfamiliar with the books. However, with a whole slew of Rings actors appearing in the new movies (Cate Blanchett confirmed, Orlando Bloom heavily rumoured, alongside the probably-returning Hugo Weaving, Andy Serkis and Ian McKellan), I wonder if Jackson is risking losing the tight focus and simplicity of The Hobbit that helps differentiate the book from the more lavishly epic Rings. I guess we'll see.

Filming is expected to begin in the Spring for release dates of December 2012 and December 2013 for the two films.
Posted by Adam Whitehead at 21:55

Email ThisBlogThis!Share to TwitterShare to FacebookShare to Pinterest
Labels: news, the hobbit

Having just reread the Silmarillion for the first time in ten years I have to say I wish they had mined some of the great stories from it to use in a film. Obviously they'd have to fill in a lot of blanks but that didn't seem to stop them with the LOTR trilogy. And usually adapting long fantasy series to film is difficult but in this case adapting a plot line from the Silmarillion would not be nearly as hard. Ideas that come to mind are the fall of Gondolin or the Numenor plotline. The Gondolin siege, in particular, would be great for the big screen as it involves the greatest city in the history of the Middle Earth combined with Balrogs, Dragons, the elves in their prime, etc. Not to mention I believe that was where Glorfindel fought a Balrog one on one in the mountain pass to allow his party to escape. It would make for an unbelievable movie. So many amazing tales from that novel. The Hobbit just doesn't stoke my interest as much as the grander tales from the history of the Middle Earth do.

This is why the Battle of the Gladden Fields in the prologue to the first LotR movie doesn't resemble the battle as depicted in UNFINISHED TALES at all, and why they couldn't use Tolkien's pre-existing framing device from UNFINISHED TALES (where Gandalf and Frodo have a long chat about the events of THE HOBBIT whilst in Minas Tirith at the end of LotR).

Do you know whether Christopher Tolkien has ever commented on exactly why he's so opposed to the Silmarillion (or other ME-) material to be adapted?

Although the adaptations of LotR weren't perfect (which movie could?) they were IMHO probably the best (or certainly among the most impressive) live-action adaptation the genre had hitherto seen.
So, it's not like one would think "They've ruined LotR already, they WON'T ruin any other Middle-earth material as long as I live".

If you ask me there are plenty of examples of authors whose works have been ruined by the respective adaptation where I could absolutely understand such a statement. But Tolkien is not among them...

Anyway, if you know more details about CT's refusal I'd be happy to learn about them.

As far as I can tell, Christopher Tolkien believes that the books are not suitable for dramatic adaptation, deeply regrets that his father sold the film rights to LotR and THE HOBBIT in the 1960s and refuses absolutely to watch the Jackson movies. He appears to be simply against anyone trying to turn the books into films, regardless of how well they do them and how successful they are.

He's probably happy enough about the money those movies get the estate, though. ;)