THE REPUBLIC OF THIEVES is NOT coming out in February

There's been some confusion over the release date for Scott Lynch's third Gentleman Bastard novel, The Republic of Thieves, exasperated by Tor.com last night seemingly 'confirming' that the book will be out next month. This is not the case. 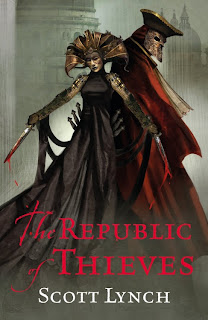 The confusion seems to have been caused by that most hated nemesis of book publishers, a date for publication that was indeed mooted but has somehow gotten 'locked' into the system. These problems can reach quite ridiculous levels: some sellers claim that A Dance with Dragons was actually released in November 2008 but they're just out of stock, for example. In this case the problem seems to have been caused by Gollancz offering February 2011 as a possible date in their official catalogue published last year and people taking it as read (understandably, perhaps, although catalogues have been wrong before). Gollancz themselves has been trying to change the date shown by Amazon and other sellers, but several editions remain showing the February 2011 date.

As of this time, Scott Lynch does not appear to have handed in the final draft of the manuscript for the book, obviously making publication just next month impossible. In fact, I spoke to Scott's editor in October and the MS hadn't been handed in then. If it had been turned in the very next day, it would still have been impossible for the book to come out in February (Lynch sells okay but not on a Patrick Rothfuss, publish-3-months-after-hand-in scale). Gollancz are now postulating November 2011 as the earliest-possible release date based on current info.

The situation is awkward and unfortunate, complicated by Scott Lynch's ongoing health complications. Rest assured that the moment that reviewers and bloggers get hard info, including review copies, you'll hear about it hear and on other blogs. And yes, Gollancz should have updated the incorrect info on their website a while ago. This incident just goes to show that people are increasingly relying on the Internet for their book release info and a few mistakes and problems in the system can result in misinformation being spread quite easily.
Posted by Adam Whitehead at 08:07

Isn't there supposed to be a prequel novel containing two short novella's out this year as well?

As far as I know, Scott hasn't even started work on THE BASTARDS AND THE KNIVES and the limited edition from SubPress will have an 18-month excluisivity contract, meaning we won't see a mass edition from Bantam and Gollancz for a year and a half after it comes out. So I'd say that's still years away.

Well, that's disappointing. I was sure I'd read from him the manuscript was in but I must have been confused (perhaps with Wise Man's Fear?).

The first-draft MS was submitted at the end of 2009, but apparently needed a lot of rewrites and redraftings. These have not proceeded speedily, presumably due to the ongoing medical issues.

I thought the book had been delayed (I never take Amazon dates as confirmed), but Gollancz themselves list the publication date on their own website as February 2011. I think that's where most confusion comes in - if the publisher has a date on their website then many people (including me!) assume it's right!

dear amazon: please update the release date for Thieves with "TBD" or "unknown". Same goes for the publisher. can't you be bothered to update your info?

I know Lynch is still small potatoes, but there's no such thing as bad PR, right? even if it is just foreplay.

Apparently the website balls-up is down to departmental problems (the website is run by Orion, Gollancz's parent publisher, not Gollancz itself) and a major technical issue which has meant they haven't been able to change things for a while.

That's the explanation why the incorrect release date is still up on the website, for what it's worth.

what a happy surprise, that Orbit responded to the complaints and twifuffle, at least with some kind of explanation.

It's a good thing i'll hear about it hear :)

I'm really beginning to wonder if the "this book will never see the light of day" people are correct....

I loved TLOLL and RSURS and hope that is not the case.

what makes it even more worring is the mention of scott's health. he hasn't updated his twitter or livejounal accounts and has pretty much disapeared off the enternet. Being a loyal fan of his, I'm really am afraid for scott's well being and pulling for his recovery. Until then I (and im sure other people as well) will keep checking for updates whenever they come. and if you happen to catch something, let us know.