Nerd Do Well by Simon Pegg

Over the last ten years Simon Pegg has risen from being a minor stand-up comic to one of the UK's most recognisable funny men, via the classic TV series Spaced and the movies Shaun of the Dead and Hot Fuzz. He's also become a sort-of ambassador and spokesman for geek culture due to his well-known love of all things SF&F (only don't mention the Star Wars prequels in his presence). 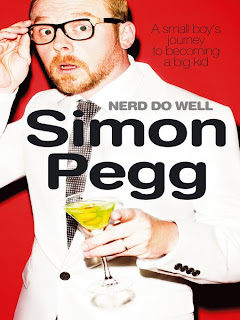 This autobiography is an interesting read but ultimately fails to entirely satisfy. Pegg himself seems to frequently cast aspersions on the project, pointing out that most celebrity bios are rubbish and a bit pointless. Whilst Pegg has certainly had an interesting enough career to cover in a book (moving from unknown stand-up to having Spielberg, Romero, Tarantino and Peter Jackson on his mobile phone contacts list), much of this 'interesting stuff' gets short shrift. Instead, the book focuses on Pegg's childhood, teenage years and upbringing in Gloucestershire.

Pegg writes engagingly, but eschews any type of chronological structure in favour of a thematic one, although this doesn't work well. As such the book bounces around the timeline of his life fairly randomly as he recounts various childhood incidents. Some of these are very funny, but the problem Pegg has is that he had a perfectly ordinary, middle-class upbringing in the 1970s and 1980s. Despite his strong geek credentials, he wasn't really a stereotypical geek at school either. Indeed, he was exuberant, out-going and arty, and even spent a brief period bullying younger and smaller children at school (until, not entirely unsympathetically, one of his victims grew up to be much bigger than him and eventually exacted revenge). His recounting of friendships and early romantic entanglements is rather endearing, but the book only really gets interesting when we get insights into events that were clearly influential on his later acting and writing.

For example, arguably the three finest chapters in the book deal with Star Wars. The first two recount his early exposure to the trilogy and his essay on the trilogy's impact on popular culture and cinema of the period. The third analyses the prequel trilogy and where exactly George Lucas went wrong (which might feel redundant if it wasn't then illuminated by a conversation between Pegg and Lucas at the end which features Lucas's eye-popping admission that he shouldn't have been making the same movie over and over again for thirty years). These sections are great, contrasting Pegg as the young kid exposed to this huge, zeitgeist-defining shift in pop culture and as the older adult confronting a cynical marketing and toy-selling exercise. A further chapter where Pegg recollects his friendship with Nick Frost and their frequent patronage of a local pub is also brilliant, as we start seeing the genesis of Shaun of the Dead in the duo's refusal to try other hostelries. There's also some solid anecdotage here, such as the time they invited Gillian Anderson to join them for an X-Files-themed pub quizz night and knew more about the show than she did, or when they convinced Chris Martin of Coldplay to let the pub have the band's second album for the jukebox weeks before its official release.

Similar gems are sprinkled through the book, such as the time Pegg and (frequent collaborator and director) Edgar Wright won an argument with a mickey-taking Quentin Tarantino, or when Pegg donned a Batman Joker mask to traverse Comic-Con to get stuff signed without being stopped by Shaun of the Dead fans, but the good stuff is few and far between. Pegg, somewhat bafflingly, says that he can't get into the nuts and bolts of his professional career without risking offending anyone. As a result, we get only a small amount of writing about Shaun of the Dead, a little on Spaced and his new movie, Paul, and virtually nothing on Hot Fuzz. Given that the latter film was much-inspired by Pegg and Wright's Gloucestershire upbringing and could have been thematically linked to the earlier formative recollections, this feels like a missed opportunity.

Every few chapters Pegg drops in a chapter from a non-existent novel in which Simon Pegg, international agent provocateur, the best-dressed man in Europe and lover extraordinaire, battles the machinations of an evil enemy with the assistance of his robot butler and bodyguard Canterbury (absolutely not based on Threepio from Star Wars, apparently) whilst being frustrated by his inability to quote from The Shawshank Redemption correctly. These sections are amusing, but thankfully brief, given their reliance on the same few jokes.

Nerd Do Well (***) is readable and somewhat entertaining, but also disappointing: the author doesn't really talk about the things that made him famous and his life story is pretty straightforward with no major drama to recount. As such it's a fun but disposable read crying out for a much more in-depth sequel. The book is available now in the UK and in June 2011 in the USA.
Posted by Adam Whitehead at 15:19

Email ThisBlogThis!Share to TwitterShare to FacebookShare to Pinterest
Labels: hot fuzz, nerd do well, shaun of the dead, simon pegg