Ronald D. Moore's original series bible for Battlestar Galactica is now available online to peruse, for those so inclined. The document is dated 17 December 2003, after the pilot mini-series had aired but before work in earnest had begun on the first season proper. 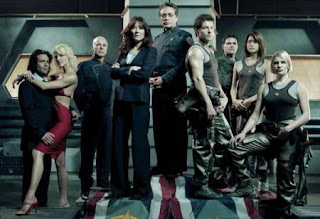 The bible outlines some information about FTL travel that never came out in the show itself (confirming the old theory that Galactica could only jump about 5 light-years at a time), as well as showing that some story arcs in the series were indeed plotted out ahead of time, though others were not. It's interesting to see how conceptions of characterisation changed: Roslin is initially described as being more hawkish and having to be reigned in by Adama's more liberal tendencies, whilst Tyrol and Baltar are described as coming into conflict and becoming one another's sworn enemies, which basically never happened (though they were not exactly best buddies in the transmitted show).

Given how the show turned out it's an interesting document, and possibly somewhat ironic given how the emphasis is firmly on realism and 'naturalistic' science fiction over technobabble and mystical mumbo-jumbo, at least in the first season.
Posted by Adam Whitehead at 22:00

I liked this program when it was on TV, but have not seen any of the other upgrades or new versions.

Very interesting. Having watched the entire series, I can see how this "Bible" made the show work and avoid those obvious "space-set series cliches." Thanks for posting the link to this.