Dom Cobb (Leonardo DiCaprio) is an agent working in the field of data acquisition and extraction. However, rather than follow the traditional routes of industrial espionage, he uses cutting-edge technology to extract this information from his targets' dreams. This can be a dangerous task, with the infiltrators at risk from the target's subconscious, but Cobb is the best in his field. 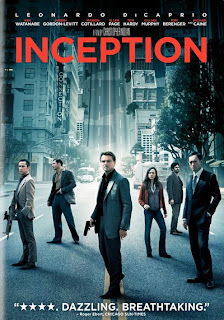 Exiled from the USA for undisclosed reasons, Cobb is desperate to return home and see his children. His latest employer claims that he can make this happen, but only if Cobb can perform the impossible: inception, placing an idea so deeply in the target's subconscious that they believe they came up with it themselves. Cobb has never managed to succeed at this before, but relishes the challenge and the reward. He assembles a team of the very best in their field to mount a reverse-heist into the unconscious of a top businessman, but can he leave his own past behind?

Inception was one of the more heavily-acclaimed movies of 2010, a complex SF thriller helmed by director-of-the-moment Christopher Nolan (The Prestige, The Dark Knight). Its cerebral and complex premise was feared to be off-putting to casual audiences, but the film took an impressive $820 million at the box office and demonstrated that a clever film could still be a break-out hit. At least that's the narrative that's been spread around by various critics. Actually Inception's complexity is more about asking the audience to retain information and maintain a keen eye for detail. The film isn't really ambiguous (aside from a slightly cheesy final shot that screams "The End...OR IS IT?!?") and the rules of the dream-hacking and details of the heist are pretty well-laid-out by clearly-related expositionary sequences.

Like The Matrix, the film isn't as original as it first appears but melds its ideas with compelling action sequences (a fistfight in a hallway with the exterior gravity switching around is an impressive highlight) and use of CGI (Paris wrapping itself into a giant ball is a staggering visual idea, executed flawlessly). It lacks the confused cod-philosophy of The Matrix's weaker sequels though, instead focusing on the characters of Cobb (a damaged, somewhat arrogant man) and his team-members, particularly Arthur (Joseph Gordon-Levitt), Eames (Tom Hardy), Ariadne (Ellen Page), Saito (Ken Watanabe) and their mark, Robert Fisher (Cillian Murphy), well-written characters who stand out alongside the film's impressive visuals and more complex ideas.

The film's SF influences are intriguing. Previously Nolan had worked with Christopher Priest on The Prestige and Inception feels very much like a Priest novel reworked to include more explosions and machine guns. The big difference between them is that Priest loves ambiguity whilst Nolan is less interested in leaving open questions, with only the very final shot leaving the story open to further interpretations. The DNA of Philip K. Dick can also be seen in the "What is reality?" question that pops up throughout the film, not to mention the vast and imposing SF city that we encounter in the final act.

The film falters occasionally. Like The Dark Knight the film occasionally feels weighed down by maybe one or two too many subplots (though vastly less of a problem than on The Dark Knight, which sometimes loses focus as a result of this). Whilst the film has a strong emotional core with regards to Cobb's relationship with his deceased wife and his desire to be reunited with his children, in other areas the film is less emotionally engaging. In particular, the key relationship between Fisher and his father (the late Pete Postlethwaite) never really grabs hold of the imagination.

These are somewhat minor issues, however. Inception (****½) features strong performances, a clever premise and mixes entertainment with thought-provoking ideas. The film is available now in the UK (DVD, Blu-Ray) and in the USA (DVD, Blu-Ray).
Posted by Adam Whitehead at 15:39

Although I'm no Inception fanboy, one thing I really loved about the movie was how much it stayed "on task." I don't really remember ANY subplots - everything that happened in the movie advanced the action forward or was essential to understanding the ending. We learn almost nothing about the supporting cast of characters and the only real character development centers around the main character and his wife. So which subplots are you referring to?

Am I the only one who thinks that Moll is a nickname for Molly? Almost nobody I've talked to has reached that conclusion, which seems odd to me.

I was under-impressed by the way the girl was drafted into what has to be a difficult and highly technical business (as witnessed by the small number of practioners and the cited difficulty of inception). It was rather like picking somebody off the street to fix computer chips based on a recommendation that they would be good at it.

She is then used in a rather heavy handed way to educate the viewers as she is 'taught the ropes'. Thereafter we see essentially zero technical/clever input from her, although her role is supposed to be key.

A good review - I'd have to say I thoroughly enjoyed the film, its few minor warts and all.

Excuse me for asking out of the blue, but I was wondering if you would review my upcoming book - Sherlock Holmes and the Flying Zombie Death Monkeys. It's basically a B-movie in a book, with the world's most popular sleuth fighting a new breed of the undead. If I could send you the PDF for review that would be fantastic.

It'd be great if you could help.

Legendary detective Sherlock Holmes is forced to deal with a plague that threatens to engulf the whole country. Victorian London is besieged by a new and terrible kind of creature. Dripping with carnage, mayhem, and some of the worst haircuts in recorded history, see how the great sleuth defies death and deals it out. Will Watson avenge the cat? And can Victorian life ever recover …

“I may be wrong about this, but I think you've really got something with this Sherlock character of yours...Solving crimes, playing the violin, that schlubby Watson – where the hell did you get this idea?”

“… a humorist of the highest order.”

@ #1 - Maybe subplot wasn't the right word, but the story involving Ciaran Murphy's character and his father felt rather under-developed considering its importance to the plot.

@ Chris - Thanks for the offer. The title alone sounds interesting! But at the moment my to-read pile stands at 90 books and by my current estimates it'll take me about a year to get through them (not counting any new books coming out this year), so I'll sadly have to decline.

Will: her name is Mal, so no, likely not short for Molly.

Mark: Can't really agree. It isn't at all like just picking someone off the street since she's trained in a related field -- she's presented as a university student in architecture, and the whole role they draft her for in the heist is architectural design. Has she utilized her skills in that particular arena before? Well, no, but as it's all taking place within the confines of the mind it isn't so much a stretch to think she could adapt a skill at architectural design in such a manner. As far as her then offering zero technical input for her key role, she's shown in several instances designing the mazes the team will be using during their mission. She designs each level and then trains each team member in how to navigate it (there's a comment in the ice fortress level when Dom asks Ariadne if she designed a backdoor, and then has her tell Eames about it so they can move through the maze more quickly).

Just one correction to your review. Cobb had of course succeeded with inception once before - with his wife Mol.

I understand your comment about Robert Fisher's relationship with his father being underdeveloped, but I have to disagree about it being less emotionally engaging. For whatever reason, it really struck a chord with me. Their last scene together I think said all that needed to be said.

Other than that one complaint, an excellent review, Adam. This site has definitely become my one-stop shopping for scifi/fantasy info.