Bantam have unveiled the cover art for their new, tie-in edition of A Game of Thrones, due for release on 22 March ahead of the TV show's debut on 17 April (the promo material says 24 April, but this has since changed). 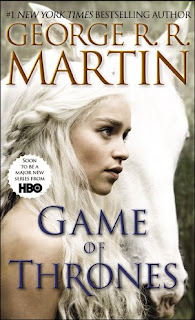 The cover art depicts Emilia Clarke as Daenerys Targaryen, a photograph originally released as the second piece of promo material for the series many months ago.

My understanding is that this new edition will complement existing editions of the book, not replace them (although new printings of the books will apparently be amended to note the HBO series' existence). I assume that this is the cover art Voyager will be going with in the UK as well. The Voyager edition is not just new cover art, but will feature a whole new, 'cleaner' typeface and will be a larger, B-size mass market paperback. Whether the American edition gets the new typeface as well is unclear at the moment, but the US edition will be available in both tradeback and mass-market paperback. 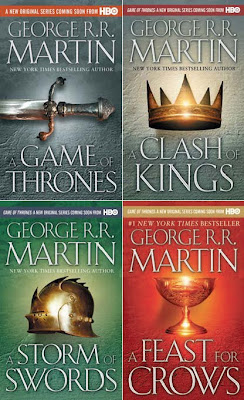 NOTE
The version on the PDF has a FOR SOLICITATION ONLY warning on it, so this may not be the final cover. In addition, the PDF has a second page indicating that the American editions of the series are going to be rejacketed with the UK cover art, with the exception of A Game of Thrones which has been given the UK cover art for A Dance with Dragons. Since the UK GoT has a dragon's skull on the cover, Bantam may have decided it makes more sense to have that as the new cover for A Dance with Dragons (the third cover design that unreleased book has had, which may be some kind of record).

At the moment it is unclear if these new editions are 100% replacing the existing American editions, but going by the title across the top of the PDF, I'm guessing this will be the case.

UPDATE
On 18 January HBO confirmed that the above art is a placeholder, not the final version. Whether that means the image will stay but the logo will change, vice versa or both, remains unknown.

One of the worst covers I've ever seen.

Wow, a blonde girl with a unic- er, horse! That can be misleading. :)

Doesn't look a particularly great cover to me although I guess it might appeal to a slightly broader market than a more tradition fantasy covers. Bit of a bland colour palette.

The .pdf says "for solicitation only", so I think it may change and is only a placeholder. While the image is striking as such, I think it is also unsuitable as cover art that is meant to attract new readers not familiar with the book already.

That the US editions as a whole are finally repackaged with the far superior UK artwork is good news.

By the way, where did you find the artwork without the "for solicitation only" mark? Just curious. Do you think it will be the final artwork?

As lenty said, the tie-in edition is obviously aimed at non-fantasy readers, and I see no harm in that. The new designs will also be available both individually and in package, I know I'd buy those.

Nah, this appeals to noone except fantasy fans who are already okay with unbelievably cheesy covers. Horrible choice to bring the books to a larger market.

Pretty much exactly what I hate about tie in covers.

"One of the worst covers I've ever seen."

Actually, I am wondering if this is the final cover art as well. I was going off what Ran said on Westeros.

Ha, I didn't even notice there as a second page to the PDF! The choice of new US covers is a little odd though. The one they've put GAME OF THRONES on is actually the UK cover art for A DANCE WITH DRAGONS. However, the UK cover of AGoT has a dragon skull on it, so it is possible that they've decided to swap them over so it's more appropriate.

I have to say I'm not sure if the other books are replacing the US ones. If so, I can imagine that cheesing off US fans, who've already had to suffer one mid-series artwork change already.

That's a terrible cover. I see something like that and think "14 year old girl fantasy" and keep walking. It's not even remotely reflective of the series.

Where's the warning on covers that the series may never be finished?

"Where's the warning on covers that the series may never be finished?"

An interesting idea, one that could be applicable to many other series as well (including - for the near future - Erikson and Jordan/Sanderson, but also Rothfuss, Lynch etc). It would certainly be honest and people would not be able to complain that they didn't know a series was incomplete before starting it and then having to wait years for the next book.

However, I suspect publishers would say it had an overly-negative connotation. Plus you'd end up with books still in print saying the series was incomplete when the final volume did come out, which would be confusing.