PC Gamer has published a lengthy interview with CCP, the Icelandic developers of the online, space-based role-playing game EVE Online. 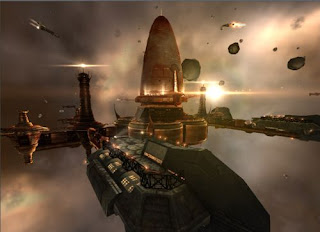 Originally launched in 2003, EVE Online is one of only a few successfully-competing MMORPGs in a field dominated by the all-consuming World of WarCraft. As of 2010, the game had more than 300,000 long-term players and 50,000 trial accounts in operation, virtually all on the same server (a smaller server is dedicated to Chinese players, who for censorship reasons aren't allowed to play on the same server as everyone else), an impressive technical achievement (even if the number of players is about one-fortieth that of WoW).

Unlike WoW, EVE is creatively driven by the player community. The game's economy, major powers and military alliances and a lot of its technology is the result of player activities rather than decreed-from-on-high. The game has also won plaudits for giving its massive expansions to all of its player base free of charge, so every player remains on a level footing. Its battles have also won a lot of coverage in the gaming press, with one recent engagement seeing almost 4,000 players fighting alongside and against one another. On the minus side the game has a reputation for a notoriously unforgiving learning curve. Whilst recently much-improved, it can remain a challenge for new players to get into the game.

In the article, the CCP founders recall how they started the project in a rather bizarre way (by producing a board game concept that kept them ticking over), how they went without money for weeks at a time and living in the offices to keep development ongoing. Finally that decision appears to have been vindicated by CCP becoming a major Icelandic company, one of the few to flourish during the recent credit crunch, and is on the verge of spreading the EVE universe to console gamers via the upcoming shooter, Dust 514, in which console gamers will be mercenaries contracted out by the PC gamer-run corps to take, hold and defend various planets. It'll be interesting to see if this cross-platform cooperation takes off.

Back in 2006-07 I spent about eight months playing EVE. Whilst the game was challenging, it was also thoroughly engrossing and a massive time-sink, to the point where I had to uninstall it or risk getting nothing else done. Good to see the game still going from strength to strength.
Posted by Adam Whitehead at 16:00

I've heard that about Eve Online - that it's pretty fun, once you actually get past the insane learning curve.

As for intervention, didn't the company intervene to break up one of Eve's Superpowers once it became dominant after the other Superpower fell apart?

I tried playing EVE at least twice on different trial accounts; I'd love to get into it properly, but while it's easily the most interesting sci-fi MMO out there (for me at least) I have a distinct aversion to spending money every month on something that requires so much focus on player relations. I'm an annoying person like that, preferring to wander off and do my own thing in an MMO, so clearly this is not for me.

Still nice to see it going on, and great fun to read about

I've been thinking of giving this a go for years but the investment in time scares me a little - I remember how I used to game for days on end and I don't wanna get back into that kind of bad habit. :(

It interests me a helluva lot more than WoW though.

EVE Online is probably one of the best games ever made save for one crucial thing; the gameplay is the worst I've had the misfortune to try.

Having said that though, the other aspects might be worth it if you can take the time to really get into the game, I could not.