Welcome to the Twelve Colonies

io9 have published the first canonical map of the Twelve Colonies system from Battlestar Galactica, Caprica and the forthcoming Blood and Chrome. 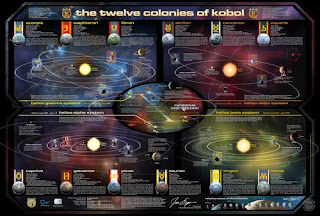 It's an interesting piece. According to the map, the Twelve Colonies system (the fanon name 'Cyrannus system', taken from the name for the system in the original 1978 series, is now confirmed as canon) consists of four stars, organised as two binary star systems. Kobol is revealed to be about 2,000 light-years away. Additional information is given on each of the Colonies' cities, major industries and some of their histories (for example, Virgon is identified as the first major power of the Twelve Colonies before a costly war with Leonis shattered its might, paving the way for Caprica's rise).

Interesting stuff. Possibly more interesting if it had come out earlier, but with Blood and Chrome set to depict the First Cylon War which raged across the whole system, it'll be interesting to see how much of this material comes up in the new show.
Posted by Adam Whitehead at 22:43

There don't seem to be a lot of gas giants in each of those solar systems. They each have one big gas giant, and that's it.