Fourteen and a half years after it was first published, A Game of Thrones has finally hit the bestseller lists. Last week it reached #25 on The New York Times bestseller lists and this week rose to #24. 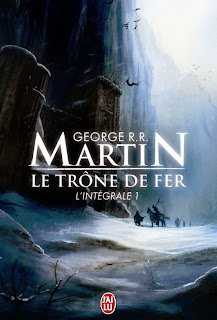 The French cover, for some variety.
This is an interesting achievement. Whilst it isn't surprising that the forthcoming TV adaptation is driving sales - sales of Charlaine Harris's Sookie Stackhouse rose by apparently 300% in the first year that True Blood debuted - it is surprising that it's happening this early, three months before transmission and with the official TV tie-in edition of the novel not due to be released until 22 March. The novel's renewed success appears to be down solely to the advance word-of-mouth on the project and, possibly, the TV series' appearance on various print and online 'things to look forwards to in 2011' lists.

Meanwhile, Joe Abercrombie has announced that he's signed a new, four-book deal with Gollancz. This deal will consist of one more stand-alone in the vein of Best Served Cold and The Heroes, presumably the sort-of Western that Joe's been hinting at for ages. This will be followed by potentially another trilogy (though Joe states that he reserves the right to change his mind). Congratulations to Joe on the new deal!

Finally, Gollancz have tweeted that the mass-market paperback edition of The Way of Kings will be split in two for publication. So people holding back for the paperback are advised it'll probably be just as economical to get the tradeback (which is £16.99 compared to two £7.99 mmpbs). Note that this just applies to the UK paperback so far.
Posted by Adam Whitehead at 11:26

£11 for the trade back on Amazon

That is one beautiful cover on the french edition of AGoT. I shudder to think of the atrocious covers the German paperbacks had back in the day. IMO, those were almost single-handedly responsible for Martin being relatively low profile in Germany. Being grossly mismarketed in that way, I guess he struggled to find his audience. One of the more egregious examples of marketing fail in publishing that I'm aware of. I mean, the cover for the second part od AGoT would be fit for a Thongor omnibus...

This French cover is stunning!!