Prince of Persia: The Sands of Time

Way back in 1989, shortly after getting my Commodore Amiga, I picked up the game Prince of Persia. The game was a revolution for its fluid, polygon-based graphics, its smooth animation (applying rotoscoping, a common film animation tool, to gaming) and its focus on swordplay. It was also utterly rock hard, requiring a near-perfect knowledge of each level to get through it in the punishing 60-minute time limit. 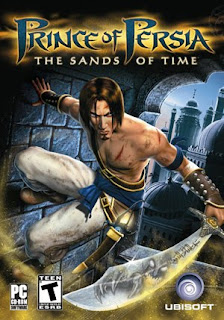 Fast forwards to 2003 and after a couple of so-so sequels, the game was rebooted as a major franchise for the PlayStation 2 and X-Box. Original creator Jordan Mechner was on-hand to ensure the game was faithful to the spirit of the original, and a hefty production budget and decent amount of development lead time ensured the embarrassment of Prince of Persia 3D would not be repeated. The game came out, was a big success and had many solid sequels and even a movie spin-off.

Unusually, the game passed me by on its original release but, thanks to the insanity of the usual end-of-year Steam deals (where The Sands of Time and its two sequels were briefly available for £2 each), I decided to check it out.

The plot is nothing new to fans of the original game: the evil Vizier is up to no good and the heroic, unusually acrobatic Prince has to foil his evil plans. Reflecting the change in the times, the Vizier has failed this time to kidnap the Princess (unrelated, as far as we know, to the Prince), Farah, who instead accompanies the Prince on his adventures, lending somewhat erratic missile support in combat and helping solve puzzles the Prince cannot manage by himself. The deus ex machina of the game is a huge magical container holding the Sands of Time; once released they turn the palace guardsmen into monstrous beasts, but the Prince can use the related Dagger of Time to manipulate time to help him in battle. Your objective is to reunite the Dagger and the Sands to restore temporal sanity to the world.

For a 2003 release, the game is graphically impressive with fast, fluid animation that is faithful to the original 1989 title, although obviously far more advanced. On PC, the controls can be somewhat cumbersome; employing a joypad or fiddling with the keyboard set-up until you find something more comfortable than the default settings is heavily recommended. Most of the game consists of various chambers which you have to traverse using the Prince's acrobatic skills to run up walls, backflip off surfaces and dangle from ledges. Mostly the game consists of puzzling over how to use the environment to best proceed, followed by some trial and error (and use of the time-rewind mechanic) until you carry it out, followed by rinse and repeat. 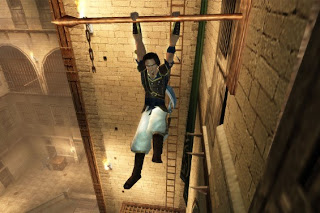 You do this a lot.
This could get repetitive, but the monotony is broken up by puzzles (mostly involving pulling switches in the right order or using mirrors to direct light beams to activate mystical switches) and combat. The former are usually clever and intelligent, not being too obtuse, but combat is a mixed bag. In order to kill enemies you have to knock them down with your normal sword and then stab them with the Dagger of Time to finish them off. This is complicated because enemies never attack in groups of less than three, and replacements teleport in to replace destroyed foes constantly. Not only this, but if you successfully evade enemies through acrobatic skill or simply running away, the enemies teleport after you. This gets particularly frustrating if you are severely injured and are trying to get some distance to heal up using a nearby fountain (water replaces lost health), only for the enemies to materialise two feet away and stab you through the head. At this point you can't help but feel the designers are using a dubious combat mechanic to overcome deficiencies in enemy AI and prevent you from using your own intelligence to defeat the enemies in your own way.

Still, whilst combat is frustrating it is never weak enough to make you give up on the game altogether. There are some isolated incidents of railroading which are somewhat ridiculous, most notably a stairway that only rises about ten feet covered in revolving blades which you should be simply able to vault over and avoid, but this results in your instant death for no apparent reason other than the designers want you to overcome the problem the hard way. But generally these are isolated problems rather than ongoing issues.

One feature of the game that mostly works is its use of the time reverse function. Essentially this was one of those late-90s/early-00s attempts to include an in-game justification for obvious gaming elements, coming from the same school of thought as Anachronox's in-game mouse cursor (where your mouse cursor actually existed inside the game universe as a floating robot) and Planescape Torment's immortal protagonist (where, since you're just going to quick-load on death anyway, the game designers made it impossible - though not consequence-less - for you to die). In this case the time reverse functions as a sort of quick load, with precise control on where you re-enter the action. This mechanic generally works well and hides a major weakness, namely that save points and checkpoints are somewhat erratically placed. Late in the game when you temporarily lose the dagger and have to rely on reloading when you die, frustration sets in when you realise how infrequent the checkpoints actually are.

The Sands of Time (***½) is generally a fun and engrossing game which features impressive use of the environment and some fiendish and intelligent puzzles (and as such withstands comparison to the likes of Portal quite well). Its plot and story-telling is pretty standard (although a late-game twist is amusing) and its combat is unimpressive, but its use of acrobatics is a nice twist to the standard platformer genre. Overall, certainly worth a small chunk of change on Steam for any gamer.
Posted by Adam Whitehead at 17:05

Email ThisBlogThis!Share to TwitterShare to FacebookShare to Pinterest
Labels: prince of persia, the sands of time

I only ever played the original and I remember it being such an accomplishment to finish it. You really did have to remember every detail about every level, especially as there was no save point. Also you had to time your sword play to absolute perfection, I recall counting out loud to make sure I got the timing right on the harder fights.

Two Thrones is the best game in that trilogy. Best action, best setting, best characterization, and best humor. Why couldn't they have made that game into a movie?

Sands of Times was okay. Same for Warrior Within.

Sands of Time has a fascinating reputation of being an overall masterpiece, including narrative. Here's one article I found recently, although I originally bought it on GOG.com because of another recommendation (Zero Punctuation):
http://kotaku.com/5501829/the-game-fiction-dilemma-knights-of-the-old-republic-vs-the-sands-of-time

I simply find it a solid game with a certain repetitiveness, but I didn't complete it.