Peter Grant is a probationary constable in the London Metropolitan Police Force who hasn't decided yet on what branch of the force he wants to serve in. A glorious career in the Case Progression Unit - who do the tedious paperwork other branches don't want - appears to be on the cards until a terrible murder takes places and Grant ends up taking a witness statement from a ghost. 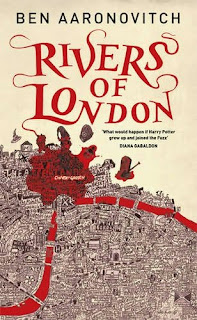 Assigned to Chief Inspector Thomas Nightingale - who deals with all the 'X-Files stuff' no-one else in the Met wants to touch with a bargepole - Grant finds himself tracking down a mystical serial killer with an old axe to grind...

Rivers of London - published under the somewhat less evocative title Midnight Riot in the USA - is the first original novel by Ben Aaronovitch, better-known to SF fans as a writer on the final two seasons of the original Doctor Who (and as the writer of the excellent Remembrance of the Daleks and its impressive novelization). It's the first in a recurring series featuring Peter Grant and Thomas Nightingale as the Met's supernatural experts, with Moon Over Soho due in just a few months and Whispers Under Ground due early next year. It's a rather lazy comparison, but this looks like it could be the closest we have to a British version of The Dresden Files, with the notable exception that whilst Dresden takes a few books to bed in and really take off, Rivers of London is superb from the very start.

The book opens with Grant being dragged into the investigation into a spate of killings and random violence erupting across London. This leads him to becoming the apprentice to Thomas Nightingale, both the Met's resident supernatural expert and apparently the last proper wizard in all of Britain. Grant's education in the ways of magic and mysticism is played out in sporadic scenes alongside the developing plot, as he learns how to create balls of light, levitate things around and so forth. This is also an effective way for Aaronovitch to set out the rules of magic in his world: magic generates a sort-of EMP field that reduces silicon components back to their natural state, making it difficult (but not impossible) for magic and technology to coexist. 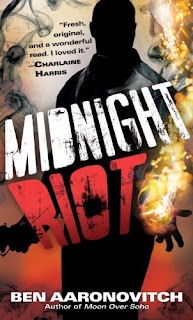 Aaronovitch makes the interesting choice to have Grant as someone who is very much aware of the SF&F genre, hence references to things like Doctor Who, The X-Files, the Twilight novels (vampires have a cameo in the book, but no more than that, thankfully), D&D and Cthulu. This could come across as a bit too knowing and a bit too nod-nod, wink-wink, but it actually feels pretty natural and works well. Aaronovitch also has that ability to make the story humourous one moment, dramatic the next and genuinely horrifying the next, spinning the story around and sending it off in a new direction just as you thought you knew what was going on, but always ensuring that everything makes sense.

The book takes its title from its main subplot: whilst Grant and Nightingale are hunting down the mystical killer, they are also tasked with repairing relations between the warring god and goddess of the Thames, using their tributary stream spirits (personified as the deities' sons and daughters) as intermediaries. This is a clever storyline which personifies parts of London as actual people in a similar manner to Neil Gaiman's Neverwhere, and is just as successful. Given that Rivers of London is also the title of the whole series (according to a couple of listings sites, anyway), I'm guessing these characters will return in later books, particularly the Lady Tyburn, whom Peter develops an antagonistic relationship with.

It's difficult to think of negatives. Perhaps the characters accept the existence of magic a little too readily, and maybe there's a few underdeveloped elements (some more info on Molly would have been nice). Otherwise, the book progresses along at a brisk pace, but is not rushed. Characterisation is strong, and Aaronovitch juggles the humour and horror very well. At one point he even trumps A Game of Thrones to provide the most shocking defenestration in the history of modern fantasy. His depiction of London is also excellent, painting the city and its history with affection without whitewashing the darker parts of its past (or showing any hesitation in reducing well-known streets to warzones). Also, whilst this is a complete novel, Aaronovitch seeds in some unresolved elements for later novels to pick up and develop.

Rivers of London (****½) is a page-turning, relentlessly entertaining novel which injects some vigour into the urban fantasy subgenre. It's available now in the UK and, under its dubious alternative title, in the USA.
Posted by Adam Whitehead at 14:26

"It's a rather lazy comparison, but this looks like it could be the closest we have to a British version of The Dresden Files"

Sounds like a 5 star review. I was surprised you only gave it 4 and a half at the end...

Can I second John's comment and say that RIvers of London's not a patch on the Felix Castor books?

I'd say the difference between Carey's series and Rivers of London is that Castor really does feel a lot like Dresden sometimes, whereas this is more of a British take on the idea behind Dresden. It's got a more definite Englishness to it, but the DNA's there.