Some new information has emerged about Blood and Chrome, the new Battlestar Galactica series on SyFy. Casting notes for auditions have been circulating, revealing that the pilot will revolve around three principal characters: Ensign William Adama, ECO Coker Fasjovik and an intelligence officer named Beka. 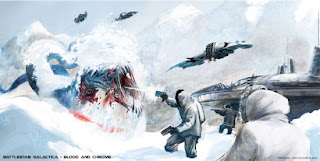 The pilot will be set during the tenth year of the twelve-year First Cylon War and will see Adama and Fasjovik as the pilot and co-pilot of an old, beat-up Raptor called 'the Weasel'. Adama wants to become a Viper combat pilot, but hasn't seen action outside of simulators before he is assigned to the Galactica, the newest battlestar in the Colonial Fleet.

The fact that casting notes have been sent out for Adama suggests that Nico Cortez, who played the role of 'Young Adama' in the Razor TV movie, is not locked into the role. Previous comments from SyFy said that Cortez would be invited to audition, but they also wanted to try out other actors as well.

The pilot is set to air in late 2011 or early 2012 before SyFy decide to proceed to series. If so, the series will make use of virtual sets of the same kind as used on Sanctuary rather than face the cost of rebuilding BSG's immense Galactica sets.
Posted by Adam Whitehead at 19:08