War has come to the Lowlands. Three great cities - Tark, Collegium and Sarn - are in danger of assault from the Wasp Empire and their allies, with the Empire hoping to seize all of the Lowlands in a single, swift campaign. In Collegium, the spymaster Stenwold Maker finds himself pressed into leading the defence of the city of students and artificers against the disciplined Ant-soldiers of Vek. In Tark, Salma and Totho find themselves aiding the defence against the Wasp onslaught, whilst in Sarn Che and Achaeos are hoping to find new allies amongst the Ant-kinden and their Moth and Mantis neighbours. 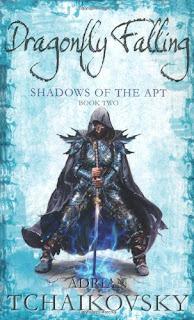 But in Capitas, in the heart of the Empire, the young Emperor has found himself a new prisoner, one with access to dark and powerful sorcery which he has offered to put at the Emperor's disposal...

The second volume of The Shadows of the Apt series picks up where Empire in Black and Gold left off, with the Wasp-kinden and their allies launching their invasion of the divided Lowlands in force. Whilst Empire was a story of back-alley knife-fights, political intrigue and clandestine dealings, Dragonfly Falling is an outright war story. Great armies and naval fleets clash, walls are defended and all manner of heroic last-stands and unexpected reversals (for both sides) take place. The slightly over-familiar military activity (Tchaikovsky is good at this stuff, but nowhere near as good as say David Gemmell or Paul Kearney) is livened up by all manner of steampunk battiness: airships, gyrocopters and even primitive submarines join the battles, one engagement turns on the deployment of a primitive air-rifle, troops are rushed into the warzone by steam trains and so on. This gives the scenes of combat and battle some much-needed freshness, as do the different kinden using their racial abilities in a massed form on the battlefield. 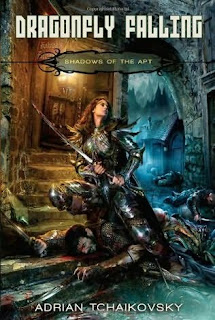 All of this action comes at the expense of some of Empire's quieter moments of intrigue, scene-setting and characterisation. Tchaikovsky hasn't got the time, even in a book almost 700 pages in length, to dwell on some moments like he did in the first volume and some elements are under-developed as a result (and some, like the formation of the Ancient League and the growing concerns of the Spiderlands over the Empire's expansion, take place entirely off-page). That said, there are some very well-developed subplots. Totho, one of the less-visible characters in the first novel, gets his own story here which may be nothing new (the corruption of power and ambition) but is told extremely well and based on his character development through the first two novels. Salma, the foppish swordsman of the first book, finds himself reluctantly becoming a Robin Hood figure behind enemy lines, whilst Major Thalric of the Wasp intelligence service finds himself drawn into political infighting whilst being relentlessly hunted by a murderous old nemesis.

These storylines are handled well and come together satisfyingly at the end in a solid convergence. However, after several hundred pages the battles do start blurring into one another and the relentlessly fast pace with barely a room for breath is somewhat wearying at times. In addition, the sudden deployment of a magical deus-ex-machina talisman into this steampunk story feels a bit redundant, especially since it seems mainly to be scene-setting for the next book. Still, this is for the most part a page-turning, inventive read.

Dragonfly Falling (***½) isn't quite as inventive as the first novel, but remains an enjoyable and different slice of epic fantasy. It is available now in the UK and USA.
Posted by Adam Whitehead at 13:09