Following the news of Stargate Universe's cancellation, executive producer Joseph Mallozzi has further bad news for fans of the franchise. He has ruled out a fourth live-action television series at this time, saying it's not even being considered. In addition, the long-gestating Stargate Atlantis TV/DVD movie has been indefinitely shelved. 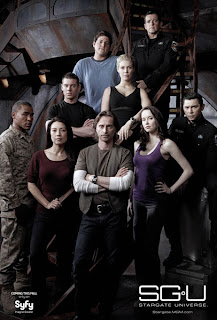 However, he did hold out a sliver of hope with the news that SyFy have been talking to other networks to see if anyone else is interested in continuing the franchise. Since the series originally began on Showtime and jumped to SyFy, this wouldn't be the first time it's changed networks. It does seem to be a long shot, though.

The remaining ten episodes of Stargate Universe's run will air in early 2011 on SyFy in the USA.
Posted by Adam Whitehead at 17:19