Galadriel will be back in THE HOBBIT

It has been confirmed that Cate Blanchett has joined the cast of the two-part Hobbit movie. She will be reprising (preprising, as this a prequel?) the role of Galadriel from the Lord of the Rings movie trilogy. 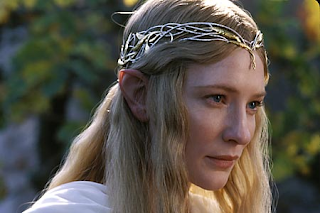 No doubt plotting to do that crazy blue freak-out thing again. What was up with that?
In addition, Peter Jackson has confirmed that Sylvester McCoy (the seventh Doctor Who) will be playing Radagast the Brown. This redresses Radagast's absence from The Fellowship of the Ring, where he was in the book but not in the movie. Radagast isn't in The Hobbit (although he is mentioned) but is in the film. Other casting announcements are that celebrated British actor Ken Stott will be playing Balin (whose tomb Gimli freaks out over in The Fellowship of the Ring), whilst Swedish actor Mikael Persbrandt will be playing man-bear hybrid Beorn.
Posted by Adam Whitehead at 20:49

lol the crazy blue freak-out thing, really freaked me out too.

I liked the "blue aura of power" scene. It was a brief glimpse of how terrifying a One Ring-empowered Galadriel would be.

Anyway, she was the hottest thing in the LOTR movies, so I'm all for it!

Crap I was hoping for Ron Perlman to play Beorn. Don't know if it would have worked, but would have been fun

The concept of a dark Galadriel (terrible as the dawn, tempestuous as the sea, stronger than the foundations of the earth, and all that) is so interesting that it's a shame Tolkien didn't realize something of the sort. At least the first time you hear it, perhaps it's unrealizable or would turn out like a regular Snowqueen or such.

And I agree that there's definitely a very weird/psychoanalytically sexual undercurrent at work there.