The ability of authors to publish new books long after their deaths (in this case, forty-two years later) continues unabated in 2011, when the fourth Gormenghast novel is published. Courtesy of the usually-reliable Jussi at Westeros.org, here is the American cover: 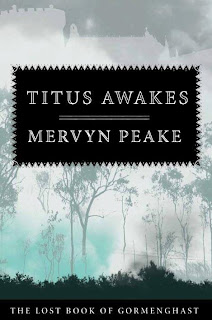 Titus Awakes is the book that Peake had started work on just before his death. However, his worsening illness prevented much progress being made on on this book (or on the rewrites or editing for the third volume, Titus Alone), although the few extant pages have surfaced over the years as 'bonus material' in various editions of the existing trilogy. Last year it was revealed that Peake's widow had used the completed material for Titus Awakes and her own discussions with him as a springboard for writing her own conclusion to the series (apparently envisaged at one point as lasting as many as ten volumes) in the 1970s, but had chosen not to publish it. This is the book that is appearing in April 2011 from Overlook Press in the United States and July in the UK from Vintage.
Posted by Adam Whitehead at 14:04

Guess this means its time for me to invest in their set, and retire my old ballantine ones..

I like it. It really invokes the cover of the Overlook Press omnibus edition.