Ciaphas Cain: For the Emperor! by Sandy Mitchell

Commissar Ciaphas Cain has a formidable reputation: an outstanding soldier, an inspiring officer and a terror to the enemies of the God-Emperor of Mankind. However, it is completely unearned. Cain actually spends his missions desperately trying to stay out of trouble and trying to find the best place to hunker down and ride out any conflict. Instead, he finds that events conspire to place him on the front lines and in the most dangerous hotspots. 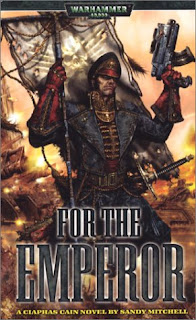 This time, Cain has been assigned to a regiment of Valhallan troopers which has been cobbled together out of two former single-sex units. With the soldiers of the formation mistrustful and resentful of one another, Cain must find a way of integrating the two sides before their new mission can even get underway. Their new assignment is Gravalax, a world on the border of the Tau Empire. Highly unusually for the Imperium, which prefers war and genocide over diplomacy and negotiation, Gravalax's exposed position on a salient into Tau territory means that it relies on the goodwill of its Tau neighbours to survive. When the Tau Ambassador is assassinated and war threatens to erupt, it falls to Cain, an Imperial Inquisitor and a penal detachment of condemned murderers to save the day.

We're back in Warhammer 40,000 territory with this novel, but this time around things are rather different to the fine novels of Dan Abnett. If the Gaunt's Ghosts series are a military SF take on Bernard Cornwell's Sharpe books, Ciaphas Cain is an SF take on George MacDonald Fraser's superb Flashman series of historical adventures, with a dash of Blackadder thrown in for good measure. As far as the rest of humanity is concerned, Ciaphas Cain is a brave, heroic warrior who brings terror to the enemies of mankind and instills valour in the men under his command. Cain himself thinks he is a cowardly, blustering braggart who is the first to dive for cover or beat a retreat when the firing starts, and this is how he comes across in these novels (his unofficial memoirs, with wry commentary from Inquisitor Amberley Veil and occasional extracts from other documents to add context). Cain sells himself short though: he is also cunning, impressively deceitful and has a talent for survival, not just for himself and his stalwart aide Jurgen (think of a cross between Baldrick and Gregor Clegane) but for whatever unit he is attached to.

As such, Cain isn't quite as cowardly and blustering as either Blackadder or Flashman and is a reasonably effective soldier. This is a good thing, as a simple pastiche of those characters in the WH40K universe would be briefly amusing but likely grating in the long run. By taking inspiration from those sources but allowing Cain to develop along his own path, Sandy Mitchell makes the character and the stories much more interesting.

The story cracks along at a fair old pace and characterisation of both Cain and his fellow troopers (not to mention Inquisitor Veil, whom we meet as both a character in the book and also as the memoir's editor) is nicely-done. For those coming to these books after Abnett's, there's also some pleasing references to the earlier books (Gaunt is briefly discussed, although not by name, at one point, as is the Sabbat Worlds Crusade) and, as a nice change of pace, we get to meet some other enemies of humanity other than just Chaos. In this book, the Tau, their Kroot mercenaries and the Tyranids (whom I have to mention, by tradition, preceded the Zerg by over a decade) are the main adversaries and provide some variety. However, familiarity with the WH40K universe and characters is not assumed, and For the Emperor! makes a viable starting point for those new to the setting.

The calling-card of these books is the humour, and Mitchell does a great job of subtly highlighting the inherent lunacy of the WH40K universe without ripping it to pieces and undermining the integrity of the setting. Instead, the satirical and comical edge works very well, resulting in a fair few major laughs as the book unfolds. Certainly the book's conclusion leaves you wanting to read more about Cain and Jurgen and their continuing misadventures.

For the Emperor! (****) is an enjoyable, fast-paced adventure story with a great line in humour. It is available now as part of the Ciaphas Cain: Hero of the Imperium omnibus in both the UK and USA.
Posted by Adam Whitehead at 18:35

Intriguing review...I'll check it out! Thanks for mentioning!

hey wert, I have two questions regarding ULTRAMARINES, the warhammer direct-to-video. is it based on any particular black library series and if you did watch it, is it any good?

ULTRAMARINES is a new story, set a couple of hundred years in the past (to avoid continuity issues with Graham McNeill's current books). Haven't seen it yet. Reviews seem to be lukewarm, suggesting it is okay but that the animation is sub-par (as the trailers suggest) and it assumes existing familiarity with the WH40K universe.