More on the CHUNG KUO reissues

As mentioned previously, Corvus are embarking on an ambitious publishing schedule for their issue/reissue of David Wingrove's massive Chung Kuo series. To recap, Wingrove published eight large novels in the series from 1988 to 1998, only to have the series unexpectedly canned by the publishers and the last two volumes written and released very hurriedly with small print runs. Unhappy with the final product, Wingrove has been planning to rewrite and re-release the books along with new material for a long time. Next year he finally gets his wish. 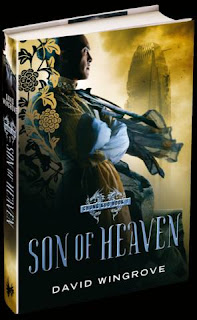 The series now starts off in a different place, with a two-volume prologue setting up the collapse of Western civilisation and the rise to dominance of China. These two books will be published in 2011: Son of Heaven as a limited print and ebook edition in February followed by a standard hardcover in March, and Daylight on Iron Mountain in the autumn. Starting in early 2012, the remaining eighteen books in the series will be published in an ambitious schedule that will culminate with the release of the final novel, The Marriage of the Living Dark (a hugely rewritten version of the original final novel in the series), in June 2015.

To help publicise the new releases, a new Chung Kuo website and blog has been established here, where David Wingrove has already blogged about a number of topics related to the series.
Posted by Adam Whitehead at 11:34

Really looking forward to these, I always meant to read the series when I was younger but never got 'round to it.