Commissar Ciaphas Cain continues to relate his honest, self-deprecating memoirs to an appreciative audience (albeit only of a few high-ranking Inquisitors who have the necessary security clearance to read it). In this episode, he relates the deployment of the Valhallan 597th to the frigid (and nonsensically-named) iceworld of Simia Orichalcae, which is an important source of promethium to the Imperium. An ork raiding force has arrived on the planet and the Imperial Guard must mount a defence of the primary mining installation. But, in the caves underneath the complex, another threat is stirring... 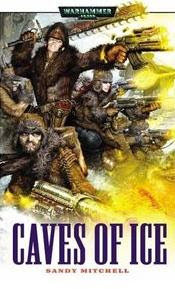 Caves of Ice is the second Ciaphas Cain novel (of seven so far published) and is, once again, a comedic book in the vein of George MacDonald Fraser's Flashman novels (with an added pinch of Blackadder), though Mitchell adds enough flourishes to avoid being derivative. In this book Cain's troops must defend a vital installation from enemy attack. Trying to find somewhere safe to ride out the battle, Cain volunteers to accompany a scouting party into the caves under the installation to ensure there isn't a way behind their lines, only to encounter some pretty horrific events and end up, once again, in the thick of the action.

It's fair to say that Caves of Ice isn't quite as successful as the first novel. The most limited, isolated location means a much smaller cast of characters and a fair bit of wheel-spinning. Cain has to mount no less than three separate incursions into the caves, and by the end the reader is as sick as Cain is of the icy, claustraphobic surroundings. It's a tribute to Mitchell's writing skill that he manages to retain reader interest despite the repetitive nature of these missions, as he raises the ante each time.

Once again, we get excerpts from other books (most notably from Lt. Sulla's ludicrously hyperbolic memoirs, but also a hilarious children's primer called Our Friend Promethium, plus the droll minutes of the tedious meetings the 597th's command staff take part in) that efficiently flesh out important bits of action where Cain is not present, whilst copious footnotes by Cain's erstwhile ally Inquisitor Veil establish the context of Cain's actions. But the focus is obviously closely on Cain and his fragrant aide Jurgen as they battle the enemies of the Imperium.

As usual, Mitchell's writing flows well and mixes effective moments of action and horror with characterisation (Logash is particularly well-handled, with the reader's irritation with his single-minded obsession with alien tech rising in step with Cain's) and his usual humour. Here he brings in some references to other books and series, with Aliens, Father Ted and possibly Babylon 5 all getting nods, and spotting these minor tips of the hat is fun.

Caves of Ice (***½) continues the story of Ciaphas Cain pretty well, although Mitchell arguably doesn't make the most of the isolated setting and the limited scope of the novel leads to some repetition. The book is available now as part of the Ciaphas Cain: Hero of the Imperium omnibus in the UK and USA.
Posted by Adam Whitehead at 18:53