The Walking Dead: Miles Behind Us by Robert Kirkman

Rick Grimes has been reunited with his wife and son at a refuge outside of Atlanta, along with his police partner Shane. However, a series of violent events and Shane's death have compelled the refugees to look elsewhere for shelter. With supplies of food and petrol dwindling and encounters with zombies becoming more desperate, Rick has to lead the group in search of a safe haven. 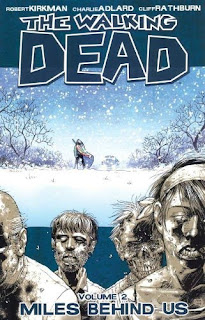 Picking up immediately after the events of Days Gone Bye, Miles Behind Us collects issues 7-12 of The Walking Dead, Robert Kirkman's popular 'zombie movie that never ends' (Shaun of the Dead creator Simon Pegg provides the introduction for this collection, appropriately), and takes us on the next stage of the traditional zombie narrative: the road trip through undead-infested territory. Surely the stand-off in the shopping mall can't be far off?

The road trip narrative gives this collection a bit more of a narrative hook than the character and plot set-up of the first book, with an episodic series of encounters with fellow survivors and other zombies culminating in our heroes finding a possible refuge on a remote farm. Unfortunately, this is undercut by Kirkman's ongoing biggest problem: he writes clunky, exposition-focused dialogue which does not sound even remotely natural, and he has a tendency to wander into corny line territory very easily. In addition, the strong point of the series' sparse artwork becomes less effective here (probably due to a change in lead artist). The art is great at depicting zombies but struggles with the human characters, and here with several similar-looking characters in the same room following what character is doing what task becomes more challenging.

Still, despite the clunky dialogue, stock characters and slightly less-effective artwork, there remains something oddly interesting about the story. Maybe it's the hints of the psychological damage our protagonists are experiencing (a sequence involving a farmer and a barn is surprisingly powerful) or the nice paralleling as their living conditions become less tolerable in time with their slowly cracking nerves and mental states, but there's definitely the feeling that there is a lot of untapped potential here. As such, whilst this collection fails to capitalise on the strengths of the first book, it remains promising. However, the story has to step up in the third volume otherwise I suspect I will not be proceeding any further.

Nr. 3 and 4 does take it up to another level, though I thought 1 and 2 were really good also. 5-8 are legendary though, one of the most emotional and brutal tales I have ever read.

hi - I'm sorry to comment this - i couldn't find contact info anywhere! would it be okay to email you some info on a webcomic called Falling Skies?