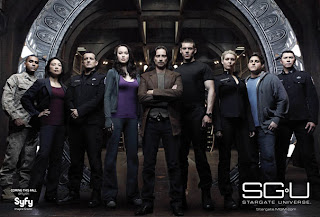 The show launched in 2009 with a blaze of publicity, some of it driven by the unexpected casting of Scottish character actor Robert Carlyle (Trainspotting) as Dr. Nicholas Rush as well as an apparent change in direction for the Stargate franchise, taking it in a more 'gritty' direction, possibly inspired by SyFy's other space opera franchise, Battlestar Galactica. Compared to the under-performing Galactica and its spin-off, Caprica, Stargate Universe started strongly, with 2.3 million viewers tuning in to the first episode. However, Season 2 opened with less than half that, at 1.1 million viewers, and two episodes dropped below the 1 million viewer mark. Whilst this was still healthier than Caprica just before it was cancelled, Stargate Universe's budget appears to have been significantly higher than the other show, meaning it was not cost-effective to keep the show on the air.

This means that after Stargate Universe's final episode airs in Spring 2011, for the first time since 1997, there will not be a Stargate TV series on the air. SyFy had plans for a Stargate Atlantis TV and DVD movie to be produced in the near future, but this had been shelved indefinitely. Beyond that, there appears to be no concrete plans for the future of the franchise at this time. Because of this, and given that several already hours have passed since SyFy have announced the news, we will no doubt be shortly hearing that a reboot/remake of the original Stargate movie is on the cards.
Posted by Adam Whitehead at 21:08

Gah! That kinda sucks! I know a lot of people didn't like SGU and couldn't "get into it," but it was my favorite of the franchise so far.

SyFy is the most stupidest station ever to do this. Perhaps we can hope that another station will pick this one up??? How can they cancel a show that is so well done??? Can't they tell what quality is??

Was this the last space opera show on tv, or am I missing one? In the late '90s, there were always 3 or 4 going at any given time.

was a fan of the first 2 series (SGU and SGA), tried to like this new one, but could not. Maybe this well make room for a more balanced action/adventure scifi show.
I guess it won't be around until "V" is just another letter in the alphabet.

My goodness, the stupidity is astounding.

First they cancel Caprica, now this. The ONLY quality shows SyFy had this entire year.

The retardedness of the viewers, and the execs, is just amazing. Bet they fill the slot with some crap like Destination Truth, Scare Tactics or Ghost Hunters. Or worse, that moron's wet dream they call professional wrestling (which is nothing more than a homo-erotic fantasy of big burly men in tights feeling each other up).

Warehouse 13 and Eureka are okay shows, but not true quality. They still have the crap-tastic acting typical of television (whereas SGU and Caprica both had MOVIE quality acting), campy cheesy whole filled writing.

Looks like there will be only one decent genre show on all of television next year, Game of Thrones. At least HBO's execs show evidence of having a couple of live brain cells left (although they did cancel ROME, so maybe not).

I liked the earlier Stargate shows,but could never be bothered to catch them.

But I followed SGU very closely. It is very well scripted, acted and filmed.

I think it has a great deal more depth to it then the others in the series. Its really a shame. Personally, I would have paid extra just to watch this show.

SGU is an awesome show. I think it was a great idea to get away from the same story lines as SG1 and SGA. if the viewers are dropping of then speed up the story line and add some more action, but dont cancel it there is so much more to do. hell you need a writer I will write for the show, i have plenty of ideas to make this even better. and as far as the Scifi network, friggin idiots what are you thinking? your cancelling all your shows and putting WRESTLING ON . HOW IS WRESTLING SCIFI? PLEASE EXPLAIN THIS TO ME!!!!!

They must have to room on their payroll for Debbie Gibson and other has bins to act Megaloyde vs gator tron. Or some other stupid stuff like that.

The Stargate franchise is one of the best scifi saga's. Even better then Star Trek.

I loved SG1, loved SG Atlantis even better (should also have gone up to season 10) and Stargate Universe is great!

Currently there are a lot of old shows on scifi and the new shows are not that good. What is the strategy? Cancelling shows in the middle of a story makes me turn away from Scifi. There is nothing interesting for me on that channel anymore.

That is really uncool, I love this franchise...Probably my favorite scifi series ever.

All the good ones are now over: Stargate SG1, Battlestar Galactica, Stargate Atlantis, Caprica, and now SGU... what is this world coming too???

what in the world are the people with money thinking star gate series are the best and to stop universe after 2 sessions in total stupid best series yet pls rethink this and give us universe. and ps you would sell more and get better ratings if let every country have dvds at same time not years after tools.
this was last good tv series on tv or dvd rest of ur series sucks

Well, it's the same old story. The boring shows go on forever. the good show get cut early. It's not just SyFy. So many good shows only last a couple of seasons then get dumped. Yet shows like Survivor and The Bachelor go on and on and on. Boring is good TV is guess. If it's not boring, it's not worth a chance. Don't challenge the writers to do better to pick up the ratings. Just give up and dump the show.

I love sg1 and sga. Sgu sucked. The producers lost their way. Return stargate to the to its theme.

I liked all of the Stargate shows, including SGU and was hoping that "the end is just the beginning" was more than just a tag line ...that maybe a new series would be coming. After all they'll be sleeping for 3 years!

If there were fewer viewers of the show than at the beginning, the change to Monday probably had a lot to do with it. There is stiff competition for the Monday night prime-time slots. I have a DVR so I could record SyFy at later time slots and get both Sanctuary and SGU, so I remained a fan of these shows. SyFy should have kept the shows on the Friday night schedule.

I was only 5 or 6 when SG-1 started, and only started watching it 5 or 6 years ago, but I'd say I've definitely made up for lost time, easily having seen all SG-1 episodes 5-6 times, 2-3 times minimum for SGA, and since it is [was :,(] still new, only once or twice per SGU episode, and I doubt I could name one series as my favourite, but I definitely loved them all, and am very sad that the good show has been scrapped, (Caprica too), but living in Canada, and only having Space channel, I don't think there was much us Canucks could do... But at least the cast & crew recognized how much we loved and supported them (especially with Space channel's "InnerSpace")...

My fav so far, maybe its because the US audience is to Dumb to understand the plot and depth of meaning that kept the ratings low. but with the end result being that the crew of Destiny could in fact be the origins of the Human Race is an amazing plot line, those people evolved after 2000 years, might be on the way to travel through time and create the original Ancients.
Paramount made the Original Serious bfore SiFi was involed, so they could continue on their own till another finance body is identified.

I liked the show, but it did suffer from some issues. It was quite different than the other Stargate series. Which meant it was going to scare off a lot of Stargate fans. And it also means that it would have to attract new ones who need to understand some of the back story from two other series they are unlikely to catch up on. Added to the fact there really wasn't a whole lot of gate travel. It should have been called Starship:Universe. Then there was it's soap opera style... Yeah.. it shot itself in the foot.

i heard that they cancelled cuz of wrestling or something...wrestling! on a scifi channel!