Much of Guy Gavriel Kay's backlist is being reprinted by HarperCollins Voyager in the UK on 3 February 2011, with new cover artwork. New to the UK, anyway, as the covers seem to be more or less the same as the new Canadian covers put out by Penguin Books.

The five released covers so far: 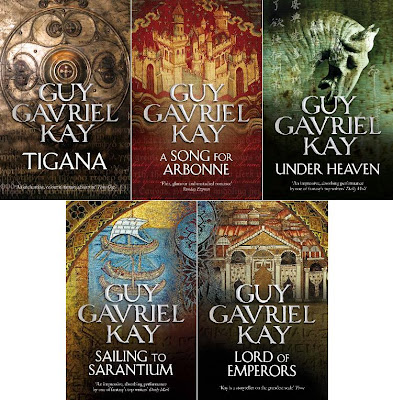 (I assume that that the covers for the two books of The Sarantine Mosaic are supposed to link up, so the final cover design may be slightly different)

In addition to these five books, The Lions of Al-Rassan and The Last Light of the Sun are also being reissued. Their covers have not been released yet.

The covers in more detail (courtesy of the superefficient Jussi at Westeros.org):

Also, Ysabel, which was given the same treatment a while back.
Posted by Adam Whitehead at 15:05

Email ThisBlogThis!Share to TwitterShare to FacebookShare to Pinterest
Labels: a song for arbonne, cover art, guy gavriel kay, lord of emperors, sailing to sarantium, the last light of the sun, the lions of al-rassan, the sarantine mosaic, tigana, under heaven

I've made reading suggestions to several people who just won't buy anything but ebooks. Strange, I know... but these people exist and GGK isn't reaching them with many of his works.

Voyager are taking ebooks very seriously now, starting off with new ebook editions of A SONG OF ICE AND FIRE that should be hitting in a few weeks. I imagine they'll be looking at doing something for Kay as well, although when is unclear.

I'm one of those people who would love to have Kay's books as ebooks. I'll keep my fingers crossed that it will happen.

I like these an awful lot! I do prefer Penguin's last round of GGK covers, but this was a nice direction for a revamp.