Nicodemus Weal is a student at the magical academy of Starhaven, where students are taught how to use magical languages to forge spells of great power. However, his grasp of magic is uncertain due to his cacography, which corrupts his spellwriting and distorts sorcery. When a powerful magician is murdered, suspicion falls on Nico and his mentor, Agwu Shannon, a former radical. As the authorities continue to question Nico and Shannon's loyalties, they in turn learn of a threat stalking the corridors of Starhaven... 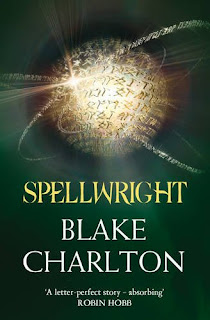 Spellwright by Blake Charlton is the opening volume in a trilogy which is based heavily around the use of magic. Many fantasy novels use spellbooks and sorcerers muttering incantations in mystical tongues, but few go deep into the languages and techniques used. Here it is a central theme of the novel and Charlton's use of cacography (a real term, referring to deliberate misspelling for comic effect) as a sort of magical dyslexia is inspired. Certainly this magic system, with its use of spelling and English Lit. terms to describe how it works, is the book's greatest triumph. I can certainly picture Brandon Sanderson reading this book and thinking, "Damn! I should have thought of that!"

Elsewhere, the book is more of a mixed bag. At its heart the book is an attempt to subvert standard fantasy tropes about prophecies and chosen ones, with the introduction of counter-prophecies and some musings on the reliability of prophecies in the first place. None of this is particularly new, but some of the ideas are well-presented and followed up on.

The book's biggest problems focus on pacing and characterisation. The former is problematic as the entire book (more or less) takes place in Starhaven and there's the definite feeling of wheels spinning as the characters run around the place learning more about history, magic and backstory in a fairly expositionary manner. This isn't helped by some breakdowns in logic (particularly the secret of a certain bridge, which should be fairly obvious to people who've looked at the thing for more than ten minutes) and some wince-inducing dialogue (the villain's tendency to explain his key weakness - he can't cast spells within Starhaven's walls - to everyone he meets). The prologue gives the impression that the book might be a long, tense hunt thorough the academy to uncover the villain, but instead he fairly turns up every few pages to mutter some cartoonish threats and then vanishes again. 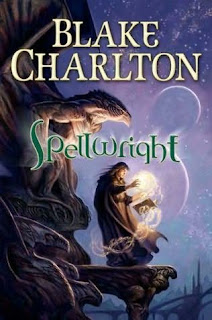 Nico has the makings of an interesting character. In his youth, certain birthmarks indicated he might by the Halcyon, the prophesied saviour of the human race from the demonic hordes lurking on the western continent. However, his cacography and the marring of the birthmark has convinced the authorities that he isn't the Halcyon after all. Nico, who loves stories about great warriors saving the world from evil, is frustrated by this thwarted chance at greatness, which makes him prime material for manipulation (by both sides) and leaves him a conflicted character. His mentor Shannon is a shady figure with his own agenda and dark past, not quite the typical benevolent teacher-figure normally beloved in fantasy. As our primary protagonists, they succeed in capturing the reader's interest. Other characters, unfortunately, fall a bit flat, such as the druid Deirdre who never really seems to develop, despite major character revelations about her late in the book.

Spellwright can be a frustrating novel. It has all the ingredients of being a successful, if not hugely original, fantasy piece. Unfortunately the mix isn't quite right. Enormous chunks of the book are given over to detailed descriptions of the magic system which is original and interesting, but these bog down the pacing elsewhere. There's an enormous amount of story and background that we are told about in major info-dumps rather than learning about organically. The villain is cliched and uninteresting. On the flipside, the book's take on prophecy is an interesting minor subversion on standard fantasy tropes and some of the revelations towards the end of the book open up the story to something more interesting.

Spellwright (***) ultimately overcomes its shortcomings to end up as an enjoyable fantasy tome, intriguing enough that I'll be giving the sequel Spellbound a shot when it arrives next year. The novel is available now in the UK and USA.
Posted by Adam Whitehead at 13:24

there is a part of me that just cant fathom why this wasn't sold as a YA novel (even though the protag is in his mid-20's).

so its blake charlton,brandon sanderson,peter v brett,peter orullian,john brown and anybody unfortunate enough to be putting out loads of crappy D&D fiction who are still writing tradtional 80's fantasy (or as one blogger calls it "tol-clones"). any other names that I missed, let me know.

funky pacing issues aside, this looks really interesting to me. I find wizards who already know everything to be boring, I want to know how people learn to do things. and anything about languages is sure to be fun for me.