Son of Heaven by David Wingrove

London, 2043. Jake Reed is a young futures broker, trading stock on the datascape, the high-tech virtual stock market, one of the best in his field. When the datascape comes under attack from hackers, Reed is called in to investigate who could be responsible. However, the virtual attack is but the opening move in a struggle years in the planning. Cities burn, riots erupt and armies are neutralised as the long-feared collapse of modern civilisation begins. 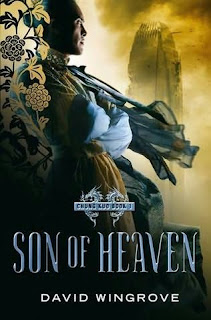 Twenty-two years later, Reed lives in a rural community in Dorset. Millions have died in the post-Collapse years and the UK is now a patchwork of farming communities. Supplies of advanced medicines and high technology are running low, with no infrastructure available to replace them. But strange things are happening. Waves of refugees are appearing out of the east, strange craft with dragons painted on the wings have been seen in the sky and, on the horizon, a vast structure has appeared and is getting closer. The age of Western dominance has ended and the future belongs to the East.

Son of Heaven is the first novel in the new version of David Wingrove's Chung Kuo series, a science fiction epic spanning 200 years of future history. In Wingrove's series, the entire world has come to be dominated by China, which has constructed vast, continent-spanning cities packed with billions of people and begun to expand into space. Wingrove previously attempted to tell this story in the late 1980s and through the 1990s in eight large volumes, but the series was not completed properly. Now Corvus are republishing the saga in twenty volumes, with a new beginning and ending and a thorough revising of the previously-published material.

Son of Heaven starts the story much earlier than the original first volume, depicting exactly how Western civilisation and modern economic system were destroyed and how China survived the aftershocks to rise to dominance. This is an interesting move: the original first book started with China's supremacy firmly established and the reasons for its rise consigned to backstory. Here we see it in progress. It also means we are introduced to the world through the eyes of outsiders (Jake and his neighbours and family who are 'incorporated' into the World of Levels) rather than from inside, which is perhaps a little more forgiving to new readers to the series.

On the downside, this means that the methods by which China's dominance was established have to be depicted in a lot of detail, and these methods are somewhat fanciful, requiring a catastrophic and colossal failure of tens of thousands of Western intelligence, military and economic experts across many years whilst still requiring China to have acquired technology far in advance of the rest of the world (particularly the AI and nanotech required start building its massive continent-spanning cities in the space of a few years). Lots of SF is based on far more ludicrous premises, of course, but generally these work by taking place in the distant future with the transition from modern society being a vague or mythological event. Here it's more central to the story and therefore more open to scrutiny. This isn't helped by Wingrove having to take into account twenty years of additional real history (such as China's economic explosion) and then weld it onto the front of his original narrative. Ironically, China's real-life economic success provides a much more reasonable grounding for it becoming the dominant world culture over the course of decades, but using this as the grounding of the story would have presumably required a much more thorough rewriting of the entire series.

Moving beyond this, Wingrove's actual writing is pretty solid, depicting both the high-tech world of 21st Century London and the post-Collapse, almost post-apocalyptic agrarian society quite well. The conflict presented by the latter is handled intriguingly: the 21st Century, money-fixated world of haves and have-nots is shown to be comfortable but also shallow. The post-apocalyptic world initially lauds the absence of pointless materialism but then exposes the ugliness of living in a world where people die of cold exposure in the winter or from very minor wounds a modern hospital would sort out in a few minutes, or where girls are encouraged to get pregnant before the age of twenty to increase the chances of propagating the species. This sort of duality was one of the key themes of the original series, with the conflicts between progress and stasis and the state and the individual being key, but with the various options being presented as having their own benefits and disadvantages.

In the latter part of the book the Chinese finally show up and we meet a raft of new characters. General Jiang Lei is leading the subjugation of England and is presented as an effective soldier but also one with a sense of history and a conscience. He is contrasted against Wang Yu-Lai, a savage and ruthless intelligence agent who is all for rape, plunder and genocide. Jiang is an interesting character whose attitudes mirror many of the conflicts inherent in the series in microcosm. Wang is a caricature and a cartoon villain at best, however, lacking convincing motivation or characterisation.

The contrast between these two characters is symptomatic of much of the book: some excellent worldbuilding stands contrasted against some highly unconvincing developments needed to make China top dog. Jake and Jiang's solid depictions stand against some under-developed characters (particularly women) elsewhere. Respect and admiration for Chinese culture is contrasted against stereotypical elements elsewhere (the 'cold, brutal' Chinese stereotype is played up a bit, even when characters like Jiang are shown to be nothing like this). Overall though, the book is readable and sets up a world intriguing enough to make even the modest wait for the second book, Daylight on Iron Mountain (due in late 2011), feel somewhat disappointing. Whether it's enough to sustain twenty novels released across five years is another question, but we'll see.

Son of Heaven (***½) is a solid opening to a very long epic SF series, overcoming its weaknesses to deliver an unsettling (if implausible) depiction of the future. The novel will be published in the UK on 3 February 2011 as a limited-edition hardcover and ebook and on 1 March as a regular hardcover. American imports of the latter should be available via Amazon and the Book Depository.
Posted by Adam Whitehead at 10:32

So far this book is fascinating (up to page 358) But I really don't like the racist overtones regarding the chinese. In my street in N.Z. My neighbours are chinese, koreans, japanese, south africans, etc.etc. and the seeds of doubt this book sows regarding domination by the chinese is unsettling!

The first book is very much from a Western perspective looking at the approaching Chinese empire with worry and fear, and that colours things. In the second book (and the rest of the series) we see things from the Chinese POV, which rebalances things a lot.