It turns out that the previous cover Orbit issued for The Dragon's Path a few months ago was a work in progress. The finalised cover can be seen here: 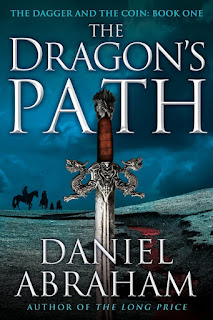 An improvement. Still a little generic, but significantly less brown, which is a good thing. Blurbage:

Summer is the season of war in the Free Cities. Marcus wants to get out before the fighting starts. His hero days are behind him and simple caravan duty is better than getting pressed into service by the local gentry. Even a small war can get you killed. But a captain needs men to lead — and his have been summarily arrested and recruited for their swords.

Cithrin has a job to do — move the wealth of a nation across a war zone. An orphan raised by the bank, she is their last hope of keeping the bank’s wealth out of the hands of the invaders. But she’s just a girl and knows little of caravans, war, and danger. She knows money and she knows secrets, but will that be enough to save her in the coming months?

Geder, the only son of a noble house is more interested in philosophy than swordplay. He is a poor excuse for a soldier and little more than a pawn in these games of war. But not even he knows what he will become of the fires of battle. Hero or villain? Small men have achieved greater things and Geder is no small man.

Falling pebbles can start a landslide. What should have been a small summer spat between gentlemen is spiraling out of control. Dark forces are at work, fanning the flames that will sweep the entire region onto The Dragon’s Path — the path of war.

The Dragon's Path will be published in the UK and USA by Orbit Books in April 2011.
Posted by Adam Whitehead at 16:01

Email ThisBlogThis!Share to TwitterShare to FacebookShare to Pinterest
Labels: cover art, daniel abraham, news, the dagger and the coin, the dragon's path

so what can we expect out of it. epic fantasy on the grim n gritty variety (george r.r. martin level)or something more akin to the traditional format (ala the way of kings).

It is pretty classy, but you're right in that it doesn't take too many chances. I honestly can't tell if this is something that would grab my eye in a store or not. I'm kind of leaning towards not.

Probably somewhere between the two. Abraham has said it's GRRM meets FIREFLY with a strong mercantile influence (the Medicis via Scott Lynch's THE LIES OF LOCKE LAMORA or, my preference for mercantile fantasy, RISE OF A MERCHANT PRINCE by Feist when he was still good).

Was gonna try and pre-order from BookDep but the two versions they have on there are a little confusing - only two paperbacks and the cheaper one is supposedly published prior to the dearer one? Strange, will wait until they update their listing.

Anyway Wert, I've been meaning to ask for a while, is it possible for you to move the "Share on Facebook etc" button to be not so quite close to the Comments button? Every time I got o access comments the Share pop-up box comes up and is annoying to always have to get rid of. Just a suggestion.

I am so buying this book, the long price was well worth it!

Yeah, I have that problem with the Share button to. To be honest, I have zero patience for wading through Blogger's interminable tutorials on how to move these things around (that's why it took so long to get one in the first place and why I haven't changed the blog's default appearance in four years), but I'll take another look and see what I can do.

Another vote for moving (or deleting, anti-Facebook heretic that I am) that button.

I use a classic template where I can go on HTML/CSS level to change things, which works better than all those widgets if you know a bit about code. Plus I decided early on that I would not use funky, animated stuff on my blog that only slows the loading time. Your blog doesn't have that, fortunately. (The worst offenders are rotating Amazon or Goodread bookcover features.)